Symphony in Blue by Shira Anthony

Join me in welcoming Shira Anthony to my blog with a never-before-seen excerpt from her new Blue Notes Novella, Symphony in Blue, released Christmas Day from Dreamspinner Press!

Are you a fan of the Blue Notes series? Would you like to know where the couples from the first four books are now? This is your chance to catch up! Aiden and Sam are finally getting married. But when Cary and Antonio’s baby daughter makes her appearance a bit earlier than planned, the big reception is put on hold. David Somers normally conducts orchestras, but this time he devotes his energy to “conducting” his friends so that everyone can join him at his Milan villa for a reunion at an intimate Thanksgiving dinner.

Sam and Aiden, Jules and Jason, David and Alex, and Cary and Antonio are soon assembled, and each couple shares something they are thankful for. Played out in four movements, this symphony is a celebration of friendship and love, orchestrated by David.

DAVID TAPPED his cellphone, shoved it in his pocket, and rubbed the bridge of his nose.

“Something ruffle the maestro?” Alex grinned up at him from the couch, his bare feet tucked underneath him, a pile of staff paper scattered about the floor and coffee table. He’d printed out a score for a new composition and managed to knock it off the printer tray. Of course, all the page numbers at the bottom of the sheets were cut off. Damn thing was at least thirty pages and would be a nightmare to organize. 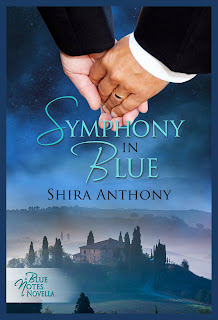 “Nothing that can’t be managed. Unlike your score.” David raised an eyebrow and Alex saw the ghost of a grin on David’s face. “You could just reprint it, you know.”

“What? And waste paper?”

“You’re stubborn,” David said as he picked up several of the pages and set them on the coffee table before joining Alex on the couch. When Alex said nothing, David leaned over and feathered several kisses over Alex’s neck. “Delightfully so, of course. But stubborn nonetheless.”

Alex sighed contentedly and pushed the rest of the music onto the floor. Fine. He’d reprint the damn thing. Later. “Who was on the phone?”

“Aiden.” David spoke the name with his lips so close to Alex’s ear that Alex nearly gasped. David’s voice just did that to Alex—that sexy baritone seemed to resonate through every part of his body. Alex was pretty sure David knew what it did to him too.

“Aiden? I thought he and Sam were in Australia.”

David pulled away and offered Alex a sardonic eyebrow. “Austria.”

“Oh, come on!” Alex laughed. “You know I can hardly keep track of

my own schedule. Now you expect me to keep up with his?”

“Not even the correct continent.” David went back to kissing him.“What was he calling about?” Anything to keep David focused on his neck.

“The party in Connecticut is off. They’re also postponing the civil ceremony in New York for now.”

Alex shot up off the couch. “What? But we’ve been planning the reception for six months now! It’s only two weeks away. What the hell happened? Are they okay? I mean…. Shit. You know what I mean.”

“Okay. Fess up. Why are you smiling?”

“Postponing? They’ve been doing that for two years now.”

“Fine. Three years. So why are you happy about it?” Alex pressed. Of course, David was yanking his chain, but he liked that. Anyone who thought David Somers didn’t have a sense of humor simply didn’t know him.

Alex laughed. “What reason would that be?”

“Who might be the more appropriate way of say—” “David,” Alex warned.

“The best.” Alex kissed David. “Should we plan a visit in a few weeks?”

“A few weeks?” David’s sly grin made Alex chuckle. “Just because we can’t have the party to celebrate doesn’t mean we can’t take advantage of the opening in everyone’s schedules.”

“What did you have in mind?”

“Thanksgiving in Milan. It’s been years since we’ve been able to get everyone together.”

“The villa?” David’s Italian villa was certainly large enough. “But—”

“Is that a problem for you? Last I looked at your schedule, your next performance is in Buenos Aires in three weeks.” David nipped at Alex's earlobe.

“No… it’s not… ah…. Shit, David, I can’t think straight when you do that!” Alex shivered and closed his eyes. “And no. No problem for me. But didn’t you give the staff at the villa the entire month off?”

Alex knew David had completely forgotten about that particular detail. He frowned, then said blithely, “We’ll just have to do it ourselves. Jules and I can handle the cooking. You and Jason can get the placed opened up. Rachel can help you with the rooms.”

“You’re serious about this?”

“Am I ever not?” David pulled at Alex’s earlobe with his teeth. “I’ll call the travel agent and look into rebooking all the air travel.”

Another kiss, a nip, and then: “The travel agent. Too complicated to handle that much rebooking online and you needn’t trouble yourself with that. Just call Jules and Jason and let them know we’ll meet them in Milan on Saturday. I’ll text them the flight information as soon as I have it.”

“Ah…. Okay. Sure. Jules and Jason.” Alex could handle that. He’d been meaning to call Jules to see how the Blue Notes album was coming along anyhow. He’d joined Jules and the other members of the trio on several of the tracks when he’d been in Paris three weeks before.

“Good.” David brushed his lips against Alex’s. “And one more thing.”

“This.” David pushed Alex onto the couch and began to unbutton his shirt. “First things first. Always.”

In her last incarnation, Shira was a professional opera singer, performing roles in such operas as “Tosca,” “i Pagliacci,” and “La Traviata,” among others. She’s given up TV for evenings spent with her laptop, and she never goes anywhere without a pile of unread M/M romance on her Kindle. 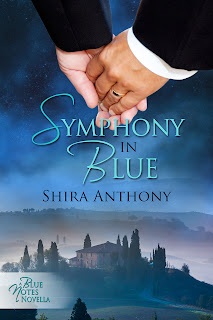 Shira is married with two children and two insane dogs, and when she’s not writing she is usually in a courtroom trying to make the world safer for children. When she’s not working, she can be found aboard a 36’ catamaran at the Carolina coast with her favorite sexy captain at the wheel.  Click on the link if you want to hear a live performance of Shira singing “Vissi d’arte” from Puccini’s Tosca.