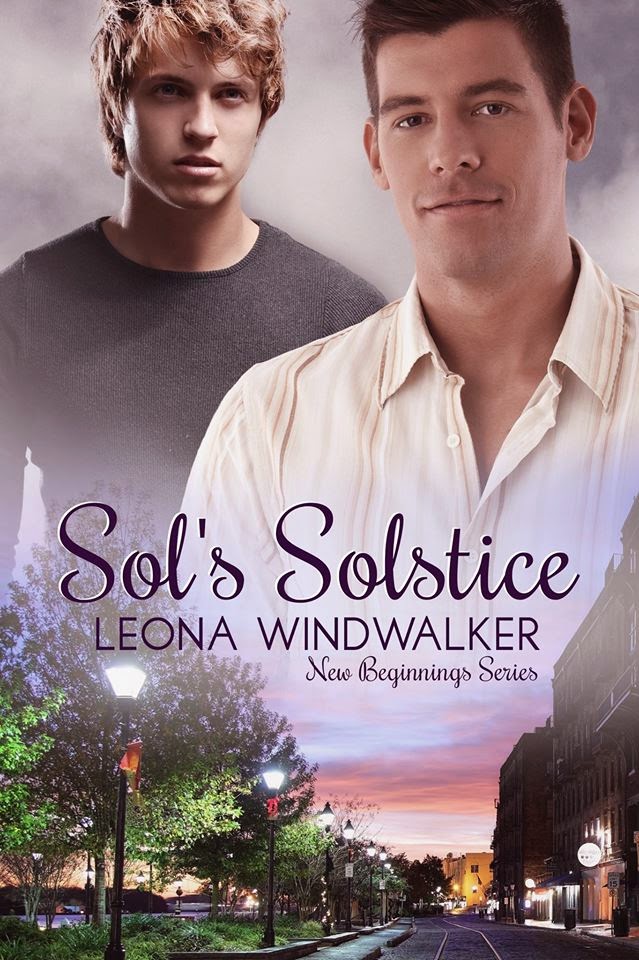 Join me in welcoming my good friend, Leona Windwalker and her debut novel, Sol's Solstice! Thank you for joining me, Leona, and congratulations on your debut release! For those of you who don't know Leona, here's a little about her.

I have two children who are both LGBT. My son is an avid gamer and is mad for Hello Kitty, make up, clothes, and shoes (especially boots). My daughter is studying art and graphic design and is an aspiring author. They can drive me crazy, but I’d be lost without them. After all, they help pamper the feline overlords.

Your feline overlords sound scary. Tell us what inspired you to become an author.

I learned to read at the age of four and became an avid reader. I never thought much about the fact that a person sat down and wrote what I read until the about the age of twelve. Then, one day, one of the neighbours was having a yard sale and I bought a book by Andre Norton. Of course, I immediately stuck my nose in the book and couldn't put it down. I even read it at a restaurant while we waited for our dinner. Not even a week after I finished it, I was surprised to see an article about female writers and their struggle for recognition. Whoa! Andre was a woman! At the publisher's insistence, she wrote under a male pen name because people did not take female writers seriously. It made me take a hard look at the names on book spines from then on.

The tag line for Sol's Solstics is Sol finds that light can indeed shine in his world. Indeed, this is an uplifting story full of hope and a happily ever after. Tell us what inspired you to write the story.

I wanted to share a story that held a mirror up to contemporary society. Sol’s story is a work of fiction, but much of what happens to him is a sad reality for too many people. Prejudice is real, as is homophobic violence, and quack psychiatry. But just as there is evil in the world, there is so much more good. I have experienced the innate goodness of people, so I know it’s out there. I wanted Sol to find this goodness and his happily ever after along the way; and wanted to write a story of hope and encouragement.

I understand that you plan not one but two sequels to the story. At the risk of revealing spoilers, can you tell us a little about the sequels?

I’m currently writing the sequel, Ben’s Beginning. Sol and Ben are twins, but Ben is ::gasp:: straight. He’s wrestling with guilt over things that happened in Sol’s Solstice and his own traumas about what happened to him along the way. He’s facing his demons, which include himself. He’s also experiencing a rebirth of sorts as he comes to understand sexuality and gender identity can be much more fluid than he thought; and he meets someone very special along the way who challenges his conceptions on both.

Book three features Ben’s roommate from college, Andy. He comes from a privileged background, which comes crashing down around his ears. It’s a riches to rags love story. You’ll have to wait to find out more, but I will share that there will be a dashing soldier in his future.

Wow! These stories sound great! Thanks for joining me today, Leona. I can't wait to read the sequels and hope to see again soon! It's been great having you on my blog!

Sol is used to flying under his family's radar, unless focusing unwanted attention away from his more outgoing, older twin. The day comes when he pays a steep price for attempting to shield his brother. Running for his life, he is nearly run down by a car driven by Seth. Can Seth help Sol find his way back from the darkness?

Find Leona Walker on Goodreads and on Facebook
Posted by Aisling Mancy at 7:00 PM