Book Tour for Joe's Cosentino's Bouncing Back, Book 1 in the Cozzi Cove Series, and an Exclusive Author Interview! 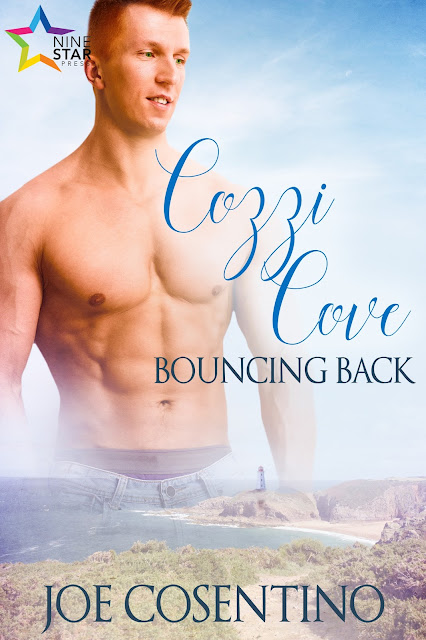 Join me in welcoming Joe Cosentino to my blog with his newest novel, Bouncing Back, Book 1 in the Cozzi Cove Series!


Bouncing Back is available now at
NineStar Press,
Amazon, Barnes & Noble, and All Romance eBooks


On Cozzi Cove at the New Jersey shore, handsome Cal Cozzi’s seven bungalows are open for summer and love. Mario and Harold are brothers and college students who happen to look alike, but couldn’t be more different: Mario is searching for love, and Harold is searching for lust. Josh and Greg, a wealthy older couple, are matchmakers for their son, Christopher. When it comes to Connor, the maid, packed with muscles and a roving sponge, anything can happen. Opposites attract as wild Tim with the secret past meets shy Mark, and porn star Chuck Caliber connects with Sean, a virgin romance novelist. And what will happen when computer-game designer Arthur has a midnight sea rendezvous with a merman? Even married Cal faces an emotional upheaval when a gay bashing turns into something quite unexpected. What secrets and passions lie in magical Cozzi Cove?


Why did you write Cozzi Cove: Bouncing Back?

My aunt and uncle had a bungalow on the New Jersey Shore. Every summer my family would stay with them. My sister and I had the time of our lives playing at the beach, bay, miniature golf course, trampoline emporium, eating salt water taffy, and dining at our favorite seafood restaurant. All those places and experiences are in the novel in a fictitious place I call Cozzi Cove, a gay resort of eight bungalows in a private cove on the Jersey Shore.
After AN INFATUATION was released, countless readers begged me for more time with one of the characters in it. So that character and his brother are the first guests at Cozzi Cove.

What is a cove?

A cove is formed when softer rocks are worn away by the sun and salty water faster than the harder rocks surrounding them. This creates a gorgeous bay of turquoise water shielded by large rocks in the distance and smaller rocks near the water’s edge.

Tell us a little about Bouncing Back.

Cal Cozzi opens his string of seven guest bungalows on Cozzi Cove for the summer. Built by Cal’s great-grandfather, each bungalow is furnished with hand-carved nautical furnishings, and has a stunning view of the bay and lighthouse in the distance. The main beach and boardwalk are only a mile away. Assisting Cal is ginger, muscular Connor, the maid packed with muscles and a roving sponge. This summer the vacationers are two brothers/college students who look alike, but couldn’t be more different. Mario is searching for love, and Harold is searching for lust. A wealthy older couple, Josh and Greg, play matchmakers for their gorgeous son Christopher. Opposites attract as player Tim meets shy Mark, and porn star Chuck Caliber connects with Sean, a virgin romance novelist. Finally computer game designer Arthur has a midnight sea rendezvous with a merman. Even married Cal faces an emotional upheaval when a gay bashing turns into something quite unexpected for him. Since Cozzi Cove is a magical place, the novel is full of humor, tragedy, mysteries, and passions. Everyone has a secret at Cozzi Cove, and nothing is what it seems. Grab your Speedos, suntan lotion, and shades and head to Cozzi Cove. I hope to see you there!

Tell us about the main characters.

Cal, short for Calvin, is thirty years old, tall, and muscular. His Italian and Scottish heritage left him with striking auburn hair and a strong nose. He dabbled as a professional football player then restaurant owner, but neither was a good fit. After Cal’s parents died in an automobile accident, he found his calling: managing his family’s seven bungalows around the rocky cove in the New Jersey shore town named after his great-grandfather. Sensing Cal’s sexual orientation as a boy, Cal’s father had turned Cozzi Cove into a gay resort. Cal is honored to follow in his father’s footsteps.
Lance is twenty-four, short, stocky, African American with dark hair and dark eyes and amazing dimples. He grew up poor, and worked hard getting scholarships and maintaining good grades throughout school. As a second grade teacher, Lance is off during the summers, his favorite time of year. This leaves him more time to do what he loves most: being with Cal.
Connor, the college student assisting Cal, is packed with muscles and hormones. He revels in Cozzi Cove, and in checking out each resident for a possible fling on the cove.
Tommy, the bald, muscular, tattooed resident of Cozzi Cove who owns the local bar has held a torch for Cal since high school. Carla, the owner of the local restaurant, has a crush on Cal’s top one-percenter sister, Taylor.
The guests are a conglomeration of interesting characters with amazing stories.

Tell us about the series.

The second book, COZZI COVE: MOVING FORWARD, is written and set for release by NineStar Press on April 18.

Who is your favorite author? And why?

Armistead Maupin has an amazing flair for writing eccentric, loveable characters with engaging and realistic dialogue.

You mentioned that you envisioned your books becoming films or a television series. Tell us about that.

Many people say my novels read somewhat like screenplays. I’d love to play Principal Ringwood in AN INFATUATION, Professor Katzer in A SHOOTING STAR, Theatre Department Head Martin Anderson in the Nicky and Noah mystery series (DRAMA QUEEN, DRAMA MUSCLE, DRAMA CRUISE), Jana’s agent Simon Huckby in the Jana Lane mystery series (PAPER DOLL, PORCELAIN DOLL, SATIN DOLL, CHINA DOLL, RAGDOLL), Mortimer one of Cinder’s dads in THE NAKED PRINCE AND OTHER TALES FROM FAIRYLAND, and Sean Guile in COZZI COVE: BOUNCING BACK. I’ll be an extra in A HOME FOR THE HOLIDAYS just to get back to the gorgeous Island of Capri! Hear that movie and television producers!

How do you deal with bad reviews?

Most of my reviews and reader response have been incredibly positive, which fuel my writing. What a gift it is for a reader to post a positive review on Amazon or Goodreads, relating how something I’ve written has moved them, made them laugh, made them cry, think about something new, or changed their life. I can’t think of anything better. As for the few bad reviews, I don’t read them. As my mother always told me, if you don’t have something nice to say about somebody, don’t say anything. I can’t imagine why anyone would continue reading a book after chapter one if he/she doesn’t like it. Just put it down and read something else. Why attack a book someone has poured his/her blood, sweat, and tears into? As the saying goes, just say no.

What is your writing process?

I write a plot summary and biography for each character. Sometimes I write an outline and other times I wing it. I show the second draft to my spouse for his notes. The third draft goes to the publisher.

You work with four publishers. How do you find the right publisher for each book?

You search the publisher’s web site to see what kinds of books they publish, and you look for the perfect fit.

How do you promote your books?

Who is your ideal reader?

My ideal reader is a lover of mystery, romance, and Hollywood. Someone who craves being swept away by a story and becoming part of the novel. My reader loves clues, suspects, and plotlines that zigzag with numerous surprises leading to a shocking yet totally justified conclusion. Finally, my reader relishes in beautiful, lush locations and captivating characters as she/he enters the portal of my book.

I love to hear from readers via my Website.

Thanks for joining us today again, Joe! Best of luck with your books!


As Lance rested in bed and Cal was putting on jeans, sandals, and a canary polo shirt, they heard Connor enter the living room and call out to Cal. After giving Lance a kiss on the cheek, Cal begrudgingly left his lover, shut the front bedroom door after himself, and then met up with Connor, who was standing next to the living room sofa.

Connor said, “It’s good to be back at work.”

“How were your grades at college this year?”

Cal thought, If average is getting Cs and Ds. “I’m guessing you were quite involved with extracurricular activities.”

Cal had a soft spot for the kid. “You did a nice job preparing the bungalows yesterday.”

“How can I be of service to you today, boss?”

“Just the usual routine.” Cal wasn’t immune to Connor’s charm, but Connor was a kid, and Cal was a one-man man. “Carry their luggage into the bungalows when the guests arrive. Turn down beds at four p.m.” He attempted to look sternly at the boy. “… Without you in them.”

“Me come on to a guest?” Connor feigned surprise.

“Yes, you, Connor. This is a vacation resort, not the baths.” Cal moved behind his desk. “After today, make up the rooms late mornings and early afternoons. Leave the sheets and towels in front of the garage for the laundry pickup. And don’t forget to sweep out the parking area.”

They heard a knock at the front door. Cal shouted, “It’s open.”

“Is this the office?”

“We’re informal here,” Cal explained. He typed into his computer, and then motioned for the young man to join him.

“I’m Mario Ginnetti.” He placed a piece of luggage at his feet. “Is it okay to park in the lot?”
Connor seemed to nearly salivate at Mario’s arms in his violet short-sleeved shirt. “You can park anywhere you like.”

Ignoring Connor, Cal said, “Yes, that’s the lot for the bungalows.” Cal handed Mario a key. “You’re in Bungalow One. I’ve got your credit card, so you’re all set.” He took a map from the topmost desk drawer. “The ocean beach is open to the public and is only minutes away. You can swim, surf, snorkel, or go on a glass-bottom boat there.” He pointed to various black dots on the map. “You’ll want to get some groceries here. Tommy Malone’s is a good bar, and Carla’s is my favorite seafood restaurant. This place has killer ice cream, which you can work off here at the gym.”

Connor interjected with, “If you need help finding anything, just ask me. I’m a native.”

“Or you can come into the office and ask me.” Cal handed Mario the map and then pointed outside.

“The cove is private property. You can sit out there all you like. The bay water is calm and warm. As you can see, the view is amazing.”

Connor added with a grin, “Nude sunbathing is permitted.”

Mario was visibly trying to take it all in.

Mario’s dimples appeared. “Will the weather always be this nice?”

“From your lips to the sea gods’ ears.” Cal smiled. “The weather report calls for rain, so that means it’s going to be sunny all week. Connor will take you to your bungalow.” 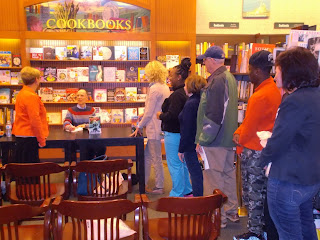