Charley Descoteaux's "Pride Weekend" (Buchanan House Book 2) is out and it's #FREE from Dreamspinner Press! 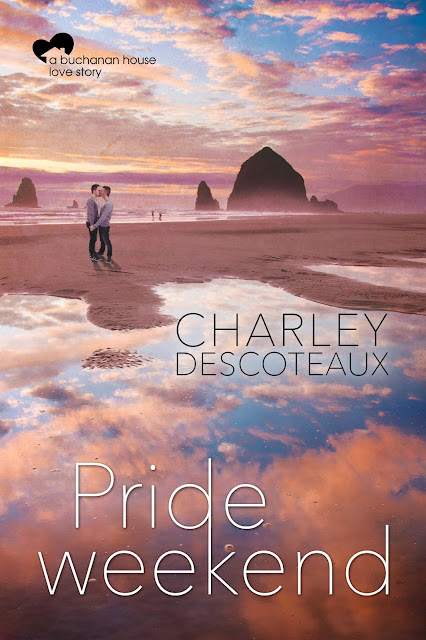 Join me in welcoming Charley Descoteaux to my blog with her newest novella, "Pride Weekend," Buchanan House, Book 2, and it's FREE for a limited time!

Overworked cubicle jockey Adam Byron wants to attend Oregon Coast Pride in style but the price of a room at Buchanan House, a popular gay retreat on the central coast, is beyond his budget. So he won’t miss out, he advertises online for someone to share expenses. Corporate drone Silas Grant responds to Adam’s ad, and the two get to know each other via texts before meeting at the coast. They agree on a no-pressure roommate arrangement, yet once they meet face-to-face their attraction is undeniable. Desire might simmer well beyond Pride weekend, no matter how hard Adam and Silas try to live up to their noncommitment pact.

Now available in ebook at Dreamspinner Press,
Amazon, and All Romance eBooks!
Book 1, Buchanan House, can be purchased here

I didn’t lose my nerve, but with how tentative and quiet Adam stayed while I chatted with our hosts and every other guest at the party, I took things slower than I would’ve liked. The last thing I wanted was for him to think I was a player. Maybe he just wasn’t used to being surrounded by a roomful of horny gay men. Or maybe he was naturally quiet in real life. Whatever his reasons, I could respect them, but I wouldn’t be deterred. I would find out what his body looked like, what it felt like against mine, what it tasted like.
And I would ignore the flare of jealousy I felt whenever another man checked out his ass or rested a hand on his arm.
Everyone flirted with everyone else—it’s just the way it worked at parties like that, and it didn’t necessarily mean anything. Except one couple kept eyeing him and whispering. Maybe hoping for a threesome, or foursome. When they started to approach us, after the other guests had left to go gambling or dancing in Lincoln City, I used a ruse to get Adam outside alone. It had worked on me the first time I had drinks at a party, in my sophomore year of high school, and it worked just as well on Adam. If he knew he hadn’t stumbled, he didn’t seem to care. The unquestioning way he let me take him outside had my dick filling before we cleared the porch. I didn’t think I could wait through the sunset, but it was pretty, so I stuck it out.
I wasn’t the only one who felt tortured, a fact that became obvious as soon as I let my arm rest in his lap.
“Do you want another drink?”
He flinched a little when I spoke. Neither of us had said a word for the past hour. Or maybe he startled because I increased the pressure of my arm against his cock at the same time.
“No, thanks. I’m good.”
I don’t doubt that. “How about if we go upstairs?”
He sighed, almost as though he’d been holding his breath and waiting for me to ask. “That sounds good.”
I didn’t really want to let go of him, but, physics. Once we stood and started moving toward the house, things happened fast. Almost fast enough. We raced up the back staircase—there didn’t seem to be time to go through the party room and then the lobby to take the indoor stairs. I pulled him by the hand until we reached the door to our room. Adam’s key was in a pocket without a button closure, so I reached inside and took it. I slipped my left hand back into that pocket while I unlocked the door with my right. Neither operation went quickly or smoothly, but that first handful—the first time I wrapped a hand around his hard cock, even through the fabric of his pocket—was a life-altering experience.
Get your FREE copy now in ebook at Dreamspinner Press,
Amazon, and All Romance eBooks!