It's #ReleaseDay for Lissa Kasey's "Painting with Fire," Book 1 in the Survivors Find Love Series! #Excerpt 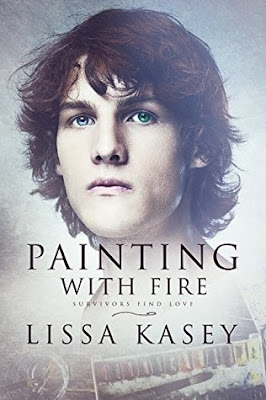 It's release day for Painting With Fire! Join me in welcoming Lissa Kasey to my blog with a fascinating article on ball-jointed dolls and an exclusive excerpt from her newest release, Painting With Fire, Book One in the Survivors Find Love Series!


Painting With Fire is now available at
Amazon US, Amazon UK, All Romance eBooks,
Barnes & Noble, and Smashwords!

Doll Story
It’s hard to believe it’s been so long, but back in 2008 I was really into anime and the whole Japanese culture. There was a convention called Kakkoi Con here in Minneapolis that I attended and it was the first time I saw a BJD (ball-jointed doll). I admit at first glance I thought they were beautiful, eerie and a little strange. Many of the girls had them cradled in the crook of their arms as they walked around the convention.

What is it? I recalled asking.

An Asian Ball Jointed doll. I was invited to a couple of panels about them, and even though the price intimidated me, I was hooked. I’d never been a girly girl. Never played with dolls. Never really had time for hobbies other than my writing. But this was a sort of creative outlet that intrigued me. Visual representation of the characters I wrote stories about. I couldn’t draw, but maybe I could create a doll that looked like them.

At the convention I attended a workshop on how to paint a “faceup” (the make up that makes the doll’s expression) on one of these dolls. I turned out to be somewhat adept in this, impressing the entire group with my painting, though it had been the first I’d ever done. Fast forward almost ten years and while I’m not the painter Bastian is; he is inspired by some amazing artists in our community that I follow. Bastian in Painting with Fire is an artist with an unusual medium. I had to go back through the story once it was finished and explain a lot of the terminology because like many people who do something for a long time, I’d forgotten regular people don’t know what this stuff is. But if you’re interested in the hobby, the dolls, or doll painting as a medium, here are a few Youtubers which inspired Bastian’s character:
Nicole’s Dreams: Andrea is an amazing artist. She has many videos on doll painting, wig making and other tutorials on her Youtube and Patreon pages.
Dollitful: She paints all sorts of dolls and offers clothing tutorials.
Mozekyto:  She makes wigs look easy.
There are a lot of information sites of the dolls, facebook communities like BJD Addicts and forums like Den of Angels. However, like with most artist communities I warn everyone that is a place of information and judgment. There are a lot of unfriendly comments about recast (knockoff) dolls, so if you look at a $900 doll and think I could never afford that and choose a $200 recast instead, the community will shun you and shame you.
I recommend if anyone is interested in the artistic side of the hobby, begin with painting Monster High or Barbie dolls as they are cheap and can be found at thrift stores. Bastian began this way and worked his way up to the glamorous dolls like Fairyland’s minifies, and Iplehouse’s many beautiful dolls. Stay away from buying dolls on Ebay unless you want a recast. There are hundreds of doll companies with varieties to fit anyone’s interest.
While some people call the dolls creepy, I find them an infinite creative outlet. Maybe you can’t paint but you like the dolls and photography. There’s a whole community of photostory artists. I just make my characters into dolls.
Do you find the hobby creepy? Or fascinating? If you could have any talent, what sort of talent would it be? Writing? Painting? Sculpting? Singing? Maybe even putting out fires like Charlie does. Let me know.
Exclusive Excerpt:
“Is there something you want to see?” Bastian asked. His eyes darted around, looking at anything except Charlie. Was he nervous?
“I watched a couple of your videos today while we were traveling. You make everything look easy.”
“Lots of practice.” Bastian opened a drawer filled with heads. Large heads, much larger than the Monster High heads had been. There were four other drawers just like it, the heads all varied in color. He chose one with a dark tan skin tone and held it up, looking between the head and Charlie for a minute, before putting it back and choosing another. He did it three more times before finally settling on one. “These are already treated. I wash and spray them with sealant before they go in the drawer, so I don’t have to wait when I’m inspired.”
Charlie smiled. “I inspire you?”
“Yes. You have beautiful bone structure. Great color and contrast.”
Charlie couldn’t help but laugh that Bastian had him broken down by art rather than life. “Paint away.”
Bastian set out a selection of pencils, pastels, and brushes. “You really don’t mind?”
“Not at all. I’d paint a doll of you if I could.”
“Why? I’m not interesting at all.”
“We’ll have to agree to disagree on that.” Charlie looked down at the drawers. “How do you pick the head?”
“Shape mostly.” He held up the one he’d picked to paint Charlie on. “This one isn’t exact, but with the right paint I can get it really close. It’s not all that unlike the trendy makeup style of contouring. See the high cheekbones? The eyes? The nose? The shape of the chin and the forehead?”
“I think my eyes aren’t as good as yours for telling that sort of thing.”
Bastian waved away his concern. “You’ll see.” He disappeared into his room for a minute and returned with the Asian top, then put on a fresh pair of gloves, flicked on the table light he’d been using the night before and began to work. The pastels went first, brushed on with a thick brush then smoothed around with his finger. He had a gray piece of putty that removed the blush. Bastian used a lot of browns, and even without any paint or pencils, the face began to look alive. He held it up after only a few minutes.
“I need to go spray it now. Each layer has to be sealed.”
“Okay,” Charlie agreed. “How do you do that?” He couldn’t recall any videos of sealing a doll, though he knew it had been mentioned many times.
“I keep the mask and sealant in the garage. It’s not safe to breathe.”
Charlie got up and grabbed his hoodie. “Lead the way.”
Bastian made his way out of the craft room, down the hall and into his room. He hesitated a moment before opening the door. His room was dark, but he flicked the light on to reveal a dollhouse as Charlie had never imagined. It took up half the room and was three floors, with stairs to get to the highest floor like a person could really go up there and hang out.

About Painting with Fire


Charlie “Wood Chuck” Fox knows his best friend and fellow wildfire firefighter Jessie Row had a major family break up in her past. Charlie has adopted her into his heart and into his huge family and when Jessie gets word her mother has passed away, Charlie fears returning home is going to tear her up.

Bastian Hart’s choice of career as a doll painter has put him at odds with his family. He’s made a sanctuary for himself on the San Juan Island of Friday Harbor, an hour away from his family. He welcomes his aunt Jessie and her friend Charlie into his house as they all prepare for the upcoming funeral. Charlie and Bastian discover a spark of smoldering fire igniting between them, but Charlie is unwilling to push and Bastian hesitant to trust.

They will have to wade through pain, hate, and fear to find their future together.

Painting With Fire is now available at
Amazon US, Amazon UK, All Romance eBooks,
Barnes & Noble, and Smashwords!


Lissa Kasey is more than just romance. She specializes in depth characters, detailed world building, and twisting plots to keep you clinging to your book reader. All stories have a side of romance, emotionally messed up protagonists and feature LGBTGA spectrum characters facing real world problems no matter how fictional the story.
Posted by Aisling Mancy at 3:00 AM