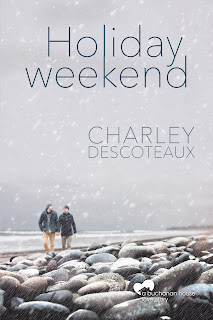 Join me in welcoming Charley Descoteaux for the Blog Tour kickoff for her newest novel, Holiday Weekend, Book 5 in the Buchanan House Series! She talks about Christmas music, gives us an awesome Exclusive Excerpt, and a chance to win two prizes!


Hello and welcome to the first stop on my blog tour celebrating the release of my Christmas story, Holiday Weekend, Book Five in the Buchanan House series. Thanks for having me, Ash!
It is possible to have a Christmas story that doesn’t have holiday music on the page—I’ve done it myself—but I don’t know if I could write one without it. I use music to get in the right mood for the story I’m working on and that’s especially true when writing a Christmas story in the spring!
“White Christmas” is the first Christmas song that shows up in the story. The atmosphere at Buchanan House is always special, but at Christmastime they go the extra mile with holiday music playing and a tree-decorating party for the guests. I pictured everyone singing along to The Drifters’ version of “White Christmas”—it’s much more upbeat than Bing Crosby’s. Given who the guests are this Christmas, I’m sure the guys would be extra-careful to choose upbeat music whenever possible.
Christmas sing-a-longs are fun, but I have a soft spot for jazz so I always listen to the Vince Guaraldi Trio during the holidays too. Since Nathan and Eric got their start in my head somewhere, I’m sure they played these songs at Buchanan House over the holiday weekend. Most of you probably remember these songs from the Charlie Brown Christmas specials. If you don’t, or just want to hear them again, the whole album is on here on YouTube.
I don’t think I could write a Christmas story without listening to Duke Ellington’s take on the “Dance of the Sugar-Plum Fairy”. “Sugar Rum Cherry” and the whole digitally remastered album, is just the ticket to get me in the holiday spirit.


What’s your favorite holiday music?
Answer in the comments for a chance at the Rafflecopter giveaway!
To learn about the dance music in Holiday Weekend, and for more chances to win in the Rafflecopter, join me at the Dreamspinner blog tomorrow, 12/16!
The Buchanan House series is best read in order, so if you need to catch up to enjoy Holiday Weekend, I’ve got you covered. I’ve arranged to have books 1, 3, and 4 priced at .99 during release weekend! Buchanan House, Tiny House, and Safe House are this week’s Weekend Reads at Dreamspinner Press! Book #2 is always free at the Dreamspinner store, so that means you can grab the whole series for only $7.96, but only on release weekend, Dec. 16-18!
Subscribe to my newsletter for exclusive content and news about sales and upcoming releases!

Everyone was nice, the food was good, and the camp was comfortable, with a fire going in a big stone fireplace, so I worked on trying to relax. A bare Christmas tree stood in the dining room with boxes of ornaments beside it, to be decorated at the party on Christmas Eve. Christmas music played all the time—it was very festive. But it was hard being there, even though I was over Paulie. I hadn’t realized when it happened, but those feelings really were gone. I could appreciate that he was cute without wanting him to fuck me.
So why does it feel so weird to be here? I couldn’t figure out the answer to that, but knowing might not have helped anyway. All I knew was that I intended to stay as busy as possible so I wouldn’t have to talk to him, and that was why I hurried through the house toward the back door to help set up the volleyball net. When that was done, I’d do whatever else Evan wanted me to do. Paulie would probably be grateful.
Even after thinking through all that, I wasn’t surprised when the door between the kitchen and dining room swung open and Paulie called my name. “Ryan? Do you have a moment?”
“Um, sure.” I turned but didn’t move any closer. “Evan asked me to set up the volleyball net, but I don’t know if anyone really wants to play.”
“Oh. I just wanted to see if you were interested in helping out in the kitchen this weekend.”
I didn’t know what to say to that. Paulie wasn’t hitting on me, but it kind of came out of nowhere. It seemed strange that he’d waited almost a whole day to talk to me, but maybe he didn’t want to make me uncomfortable. Or maybe he really didn’t want to talk to me at all and was just being nice.
“You’re a good cook. You don’t have to be satisfied with only being muscle this weekend.”
“Really?”
“Yes, really. If you’d be more comfortable working with Eric—”
“No. It’s okay. After the net is up, I could give you a hand.”
Paulie smiled, and I could tell he was relieved and grateful. We had spent over six months together, and I’d gotten to know him a little. Hopefully every minute of that hadn’t been a lie. Paulie being the nice guy I’d thought he was gave me more confidence that my instincts weren’t all bad where men were concerned. Even with how good everything seemed to be going with Glenn, I worried it was mostly one-sided. Glenn was so adorable and smart and sexy, and everyone liked him.
And if he dumps me, I don’t think I’ll ever get over it.
About Holiday Weekend


Ryan Orchard moved from small-town Idaho to Portland almost two years ago and still feels like a hick. When Paulie Nesbitt dumped him, he wasn’t even surprised. Despite losing twenty-five pounds since then, Ryan’s confidence is nonexistent and his life has stalled. Not only is he convinced the career he wants is beyond his reach, he’s given up on relationships. A new job at a familiar restaurant—and his gorgeous coworker—could be just what Ryan needs to believe in himself again.

Glenn Hernandez might be the only nineteen-year-old in Portland who dreads his days off. Between his horrible housing situation and the ever-present temptation to crawl back into the bottle, Glenn prefers to keep busy. He volunteers at the Elliott Foundation House, a homeless shelter helping LGBTQ sex workers. As an alum of the shelter, Glenn finds it hard to leave his past behind. But when the new server at the trendy restaurant where he works catches Glenn's eye and works his way into his heart, Glenn finally has a reason to start a new life.
Holiday Weekend is available now from Dreamspinner Press,
Amazon, and All Romance eBooks!
Check out the Buchanan House Series Page at Dreamspinner Press!
Get your FREE copy of "Pride Weekend" now in ebook at Dreamspinner Press,
Amazon, and All Romance eBooks!

Now through December 30th
Follow the Blog Tour and enter to Win!
Prize #1: signed paperback and swag (US only, winner’s choice: Tiny House or Safe House) 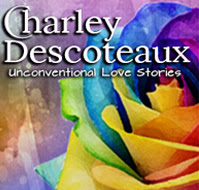 Charley Descoteaux has always heard voices. She was relieved to learn they were fictional characters, and started writing when they insisted daydreaming just wasn’t good enough. In exchange, they’ve agreed to let her sleep once in a while. Charley grew up in the San Francisco Bay Area during a drought, and found her true home in the soggy Pacific Northwest. She has survived earthquakes, tornadoes, and floods, but couldn’t make it through one day without stories.
Sign up for Charley's Newsletter!
Join Rainbow Snippets on Facebook!
Follow @QueerBlogWed on Twitter: #QueerBlogWed
Find Charley on her Blog, Facebook, Dreamspinner Author Page,
Twitter @CharleyDescote, Goodreads, and Pinterest
Posted by Aisling Mancy at 3:00 AM