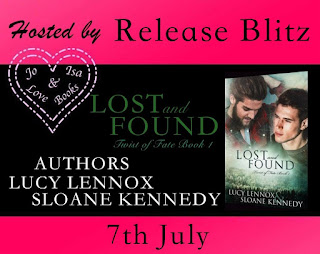 
He promised to never leave me. But when I needed him the most, that was exactly what he did...

From Bestselling Authors Sloane Kennedy & Lucy Lennox comes an exciting new series about how a twist of fate can change everything...

He promised to never leave me. But when I needed him the most, that was exactly what he did...

Wilderness guide Xander Reed has spent fifteen years trying to forget the night he turned to his best friend in his darkest hour, only to find the young man who'd sworn to always have his back was turning his on Xander instead. Two thousand miles and fifteen years of building a new life in the quiet backcountry of the Rocky Mountains should have been enough to put the memory of Bennett Crawford out of his mind forever, but old wounds run deep and when Bennett suddenly reappears in his life as part of a wilderness expedition Xander is guiding, the scars he thought long healed break wide open.

I'd only ever wanted to protect Xander from getting hurt again. I never considered the one he needed protection from was me...

Bennett Crawford was faced with an impossible choice the night his best friend needed him.

As the only son of one of the wealthiest families in New England, he should have had the world at his feet, but losing his best friend at the tender age of fourteen changed everything. And even though Bennett's managed to hide behind a mask of contentment as he takes his place at his father's side in the family business, inside he's searching for the piece of himself that's been missing ever since Xander Reed walked out of his life. Bennett's only saving grace is his work with a group of inner city kids, and when he's given the chance to show the troubled teens that there's a bigger world out there waiting for them if they just have the courage to reach for it, he takes it.

But when he steps off that bus for what was supposed to be a week of fun and adventure, he's instantly returned to the past when he discovers their expedition guide is none other than the boy he let go so long ago. Only, the soft-hearted, insecure little boy Bennett once knew is gone, and in his place is a brooding, bitter man who isn't interested in second chances.

People leave. I know that now and nothing Bennett has to say to me will change anything...

All Bennett wants is another chance to show Xander that friendship was only the beginning. But when a stubborn Xander refuses to even hear him out, Bennett realizes he's going to need to fight dirty.

Because now that he's found Xander again, he's not letting him go a second time... 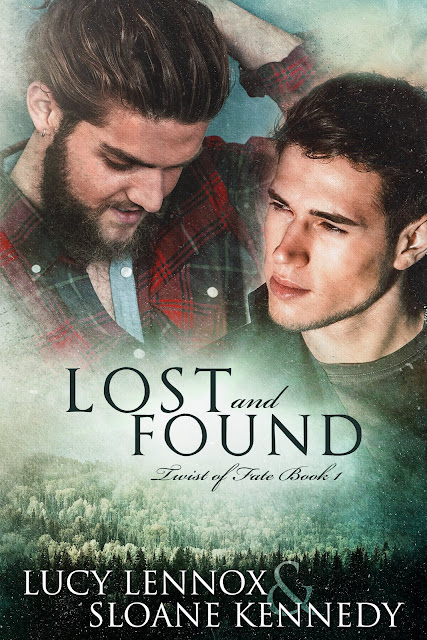 GOODREADS
https://www.goodreads.com/book/show/35440383-lost-and-found?ac=1&from_search=true
Purchase Links
http://getBook.at/LostAndFoundTwistOfFate1
http://amzn.to/2tD6rzQ
EXCERPT
This time when Xander turned back, the look in his eyes was a cross between hatred and anguish, and it hit me right in the gut. I wanted to double-over with the pain of it, but I stood frozen instead.
“What part aren’t you getting, Bennett? I don’t want you here. I don’t want to talk to you. I don’t want to even fucking look at you.” Xander squeezed his eyes closed for a moment before pinning me with a hard look. “You know what? Be with him. I thought maybe you deserved better, but I realized I don’t know you. Maybe I never really did. Maybe you two are perfect for each other. For all I know, you like guys like that. The one thing I am certain about is that I don’t want anything to do with you anymore, Bennett Crawford, so just leave me the hell alone.”
I stood there staring at him, knowing I’d had a strong hand in changing the sweet, quiet boy I’d known into this angry, bitter man, but I couldn’t quell the frustration that went through me, either. I felt like a raw, open wound and my self-preservation instincts kicked in.
“Fine. I’ve been turning myself inside out to talk to you and apologize for what happened that night, but if you’re so hell-bent on pushing me away, I guess that’s it then.”
I turned back toward camp before stopping and clenching my fists. As usual, I couldn’t stop it there. “Just for the record, I’m not fucking Aiden. We’re just friends.”
“Whatever,” Xander mumbled. “Like I care.”
Seriously? I whipped back around and stalked closer to him, fighting the tears of anger I could feel building. “What the hell happened to you? When did you become such a jackass?”
Xander stood back up from where he’d been squatting by the stream to fill his bottle. He took two giant strides toward me until his chest was practically pressed up against mine. His familiar cobalt eyes glinted in the dim moonlight streaking through the trees.
“The night you closed the door on me,” he said without any kind of hesitation at all.
My chin trembled and I begged the fucking tears to stay put, even if they had to cling to my eyeballs by nothing but a sheer force of will.
“I hate you,” I said. It came out as more of a sob than an accusation and I felt myself wince at the sound of it.
“The feeling is mutual,” he rumbled. “Join the fucking club.”
I turned again to leave but he grabbed me by the elbow and spun me around, pushing my back up against a nearby tree. “Why do you keep trying to fix this?” he barked in my face, clearly frustrated.
My traitorous dick began to throb at his nearness, even though my self-preservation instinct was telling me to run. “Because… because I want…” My eyes cast downward at the ground. “I want…”
“What do you want, Benny?” It was like a whisper, a caress that I felt all the way into my gut and down into my balls. He stepped forward as he waited for my answer. His chest brushed mine and I felt his fingers stroke my neck before his entire hand came to rest on the side of my throat. I could feel him trembling as he applied just the tiniest bit of pressure. His eyes closed like he was in pain or something and I felt my own lids slide shut because I knew I was the cause of all that hurt and rage.
You, I thought. God, all I ever wanted was you. 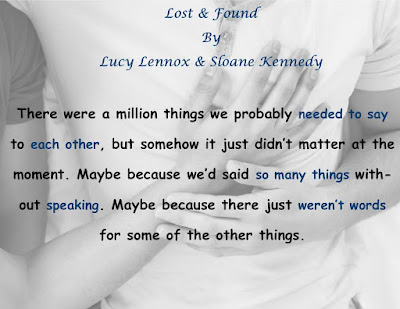 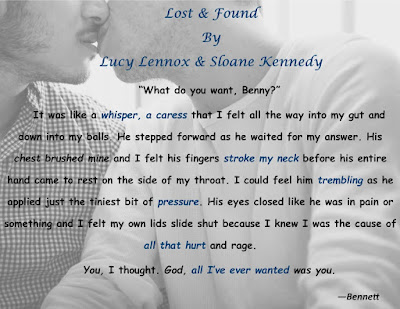 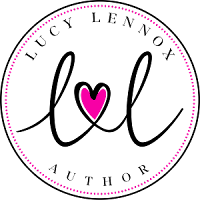 After enjoying creative writing as a child, Lucy didn’t write her first novel until she was over 40 years old. Her debut novel, Borrowing Blue, was published in the autumn of 2016. Lucy has an English Literature degree from Vanderbilt University, but that doesn’t hold a candle to the years and years of staying up all night reading tantalizing novels on her own. She has three children, plays tennis, and hates folding laundry. While her husband is no shmoopy romance hero, he is very good at math, cooks a mean lasagne, has gorgeous eyes, looks hot in his business clothes, and makes her laugh every single day.

Lucy hopes you enjoy sassy heroines and sexy heroes as much as she does. Happy reading!

Although Sloane Kennedy always dreamed of being a writer as a teenager, she didn't take the plunge until March of 2015 when she released her first novel as an independent author. Since then, she has released more than a dozen books including the Amazon best-selling "Barretti Security" series, "Finding" series and "Protectors" series. While she initially began writing M/F romance, she found her true passion writing gay romance and all four of her most recent releases reached the #1 spot on Amazon's Gay Romance bestseller list and Freeing Zane, her final book in the Barretti Security series, made it to Amazon's overall bestseller list. Sloane was born in Germany and grew up in Virginia and Wisconsin. Although she currently lives in Wisconsin, the place where she has always felt most at home is Seattle and many of her books take place in the Emerald city. Although she is unmarried, a menagerie of 2 dogs and 3 cats keeps her busy enough and 3 young nieces take care of the rest of her free time. Sloane loves being able to share her passion for romance with readers and she is truly humbled by all the support she's received from fans and fellow authors alike.

To my new FB friends, feel free to check out my fan group, Sloane's Secret Sinners. We do lots of giveaways and it's the only place you can sign up for a chance to get an ARC.
YOU MUST BE FRIENDS WITH ME OR FOLLOWING ME TO JOIN
https://www.facebook.com/groups/1760064160913779/
Thank you for touring with Jo&Isa♡Books
https://www.facebook.com/JoandIsalovebooks/