High Romance on the High Seas! 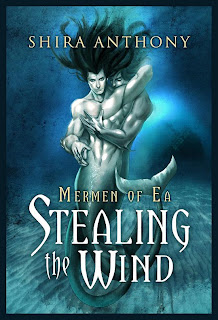 Stealing the Wind - Book one of Shira Anthony's Mermen of Ea Series
Okay, I admit it. I can't get enough of this series. One of the luxuries we authors have is to be able to share our work with each other long before you, the reader, has the benefit of reading it. I come from a writing background, having written in almost every form imaginable, and am not easily impressed. Shakespeare said it best when he said that there are only seven stories to be told[1], and it's up to us as authors to build on one of those seven themes, make it fresh and new, intriguing, and spell-binding enough to capture and hold your imaginations hostage. I have watched this series come to fruition and can honestly say I have rarely encountered an author as imaginative as Shira is. This story is not only sure to hold your imagination captive, but your heart as well. And, your, er... libido. Read it, enjoy it, and get to know Shira. A very worthy read by a smart, imaginative author and a very cool person.

Thanks, Aisling, for inviting me to talk about my new Dreamspinner Press release, Stealing the Wind!  This book and series are a bit of a departure from my usual contemporary romances, but I’m having a blast letting my imagination run wild and diving (pardon the pun!) into the universe of the Ea, the merfolk shifters who inhabit the Mermen of Ea Series. 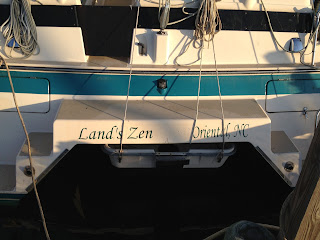 I wasn’t a sailor growing up, although some people call me a fish because I love to swim (and I am pretty good at it). It wasn’t until I was an adult that I caught sailing fever big time, thanks to the man who later became my husband. We just bought our third sailboat, a catamaran, and this one’s big: 35’ long and 16’ wide, it has 2 cabins, 2 full heads (bath with shower, toilet, and sink), and a great galley kitchen. We named her “Land’s Zen,” because when I’m aboard, I feel as though I’m in that Zen happy place I wish I could retreat to when times get tough.

I knew I wanted to write a story set on the ocean. In fact, I’ve had a contemporary romance involving sailing on the back burner for a while now. But I grew up on fantasy and sci-fi, so when I starting writing a gay romance about pirates and suddenly one of them shifted into merman form, I shouldn’t have been surprised. 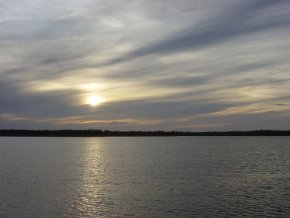 Stealing the Wind is the first in a trilogy that follows the story of Taren Laxley, a slave who works for years rigging the tall ships that put into port in Raice Harbor. Taren dreams of sailing on one of those ships, but when he’s sold to a tavern and forced to share drafty sleeping quarters with many other slaves, his dreams fade. Enter Jonat Rider, captain of the Sea Witch and his first mate, Bastian, who decide Taren would be a delicious addition to their bed. Taren finds himself mesmerized by both men, and willingly becomes their bedmate in return for a promise of freedom after three years.

Two years into his indenture, however, Taren is lost at sea and what finds him is nothing short of his destiny in the form of Ian Dunaidh, captain of the rival ship Phantom and Rider’s sworn enemy. Taren is immediately drawn to Ian, and soon learns that Ian and his crew are not human. They are Ea, shifter merfolk who live on a secluded island. Taren discovers that he isn’t human either. He’s a merman. Let the adventure begin!

Stealing the Wind is a story of love and adventure in equal measure, and Taren and Ian’s love becomes a small piece of a very large puzzle. Who were Taren's parents?  Why was he separated from his people? Why are his dreams so vivid, and why do they involve a man who looks very much like Ian? I hope you’ll join me on Taren’s exciting journey of self-discovery.

Would you like to read an excerpt? Click here and read a very NSFW bit about mermen sex (yes, they do have sex in their shifted form!). Or click here to read the first chapter of the novel. I hope you’ll enjoy these slippery men as much as I’ve enjoyed writing them! -Shira

Blurb: Taren Laxley has never known anything but life as a slave. When a lusty pirate kidnaps him and holds him prisoner on his ship, Taren embraces the chance to realize his dream of a seagoing life. Not only does the pirate captain offer him freedom in exchange for three years of labor and sexual servitude, but the pleasures Taren finds when he joins the captain and first mate in bed far surpass his greatest fantasies.

Then, during a storm, Taren dives overboard to save another sailor and is lost at sea. He’s rescued by Ian Dunaidh, the enigmatic and seemingly ageless captain of a rival ship, the Phantom, and Taren feels an overwhelming attraction to Ian that Ian appears to share. Soon Taren learns a secret that will change his life forever: Ian and his people are Ea, shape-shifting merfolk… and Taren is one of them too. Bound to each other by a fierce passion neither can explain or deny, Taren and Ian are soon embroiled in a war and forced to fight for a future—not only for themselves but for all their kind.

Buy “Stealing the Wind” at Dreamspinner Press, or at Amazon, Barnes and Noble, AllRomanceEbooks, and other retailers.

Shira Anthony was a professional opera singer in her last incarnation, performing roles in such operas as Tosca, Pagliacci, and La Traviata, among others. She’s given up TV for evenings spent with her laptop, and she never goes anywhere without a pile of unread M/M romance on her Kindle.

Shira is married with two children and two insane dogs, and when she’s not writing, she is usually in a courtroom trying to make the world safer for children. When she’s not working, she can be found aboard a 35’ catamaran at the Carolina coast with her favorite sexy captain at the wheel.

[1]
Shakespeare's seven plots:
Posted by Aisling Mancy at 3:00 AM