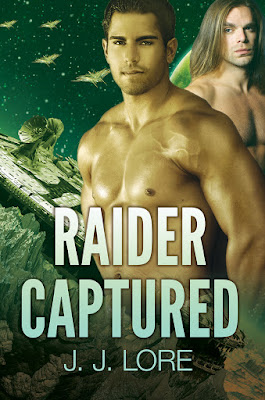 Is love possible between sworn enemies when
the universe seems determined to tear them apart?


Sagiv, a genetically modified Atavaq fighter, is captured when his master’s raid on a Domidian ship goes wrong. Daran, a young Domidian science officer, claims the warrior for ransom and as a subject for study. As they spend time together in the close confines of the shipboard cabin, both learn more about the other’s culture, and against all odds, a fragile trust begins to form. But the ship is approaching a frontier outpost, where Daran will be expected to ransom Sagiv—even though it means condemning Sagiv to die for the dishonor of his defeat or suffer in the fighting pits. That’s if bounty hunters don’t find them first. Daran’s risen up the ranks through hard work and always following protocol, but he sees something in Sagiv that might be worth breaking the rules for the first time in his life—maybe even something worth sacrificing everything to keep.

J. J. Lore has been interested in the dashing men who roam outer space since she was transfixed by Han Solo piloting the Millennium Falcon a long time ago in a theatre far, far away. Sadly, there is no way for her to join in the fun of intergalactic adventures unless she writes them, so that’s what she does whenever she isn’t taking care of the business of life. If you can’t find her typing madly on her sluggish keyboard, she’s probably poking around in a thrift store searching for the perfect pair of worn jeans or a vintage kachina bolo tie. These days she puts her anthropology degree to work when she whips up dishes from many different cultures, most of which benefit from a liberal dose of sriracha or a smear of green curry paste. Her favorite reading topics are costume history, epidemiology, and permaculture, all of which she’d like to work into a story if she’s suddenly overcome with a brilliant idea someday.