#ReleaseDay! Dianne Hartsock's "Nicolas" is OUT! Join us for the mysterious Krampus, an #Excerpt, and an Exclusive #Giveaway! Enter for a chance to win! 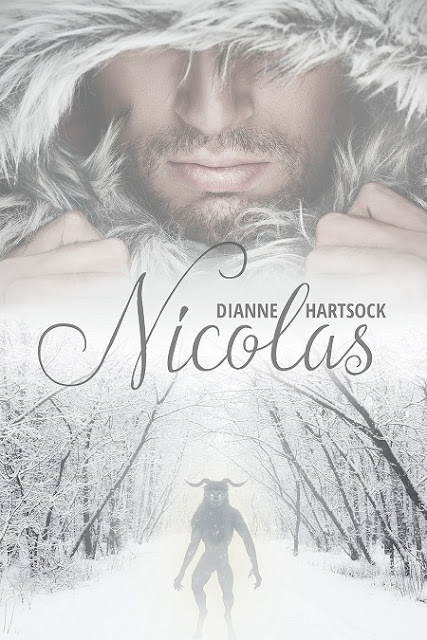 Welcome Dianne Hartsock with her newest novel, Nicolas, an incredibly interesting article, an excerpt, and an exclusive chance to win a $5.00 gift card to All Romance eBooks! It's a pleasure to have you here, Dianne!

Welcome! First off, I’d like to say a huge THANK YOU to Aisling for sharing his blog with me today. Isn’t he fabulous?

You’ll have to forgive me if I seem a little excited, but my story Nicolas releases today, and I have to admit, these are some of my favorite characters I’ve written.

There’s my hot Italian, Nico, and his sweet Jamie. But there’s also Piter, beautiful, sensual, deceitful. The exquisite human form the Krampus takes in this story.

In the German legend of the Krampus, Krampus is the troll-like creature who follows St. Nicolas, punishing the naughty children while Nicolas rewards the good. (National Geographic)

The balance of good and evil? Perhaps. But for my story, I didn’t want the Krampus to keep popping up like the bogeyman. I thought it better if he could choose at will the guise of a man, lovely and treacherous, weaving his lies, creeping into a man’s thoughts and dreams until the person could no longer tell reality from nightmare.

This is the creature who follows Nicolas through the centuries, his enemy, and in a moment of extreme loneliness, his lover.

And this is where my story begins. Nico is stranded on Lake Huron on the eve of St. Nicolas Day, to be rescued by Jamie, a lonely artist renting a cabin for the winter in which to paint and also to be apart from a world that only seems to hurt him. Piter follows, bringing chaos and nightmare to Jamie’s life. Jamie comes to love Nicolas, but will this be enough to save them?

Thanks for dropping by! At our home, it’s traditional for us to open our gifts Christmas Eve and our stockings from Santa on Christmas morning. For a chance to win a $5 ARe Books Gift Card, please comment below with your email address and tell me of a favorite holiday tradition of your own. Happy Holidays!


Betrayed by a lover, Jamie rents an isolated cabin on Lake Huron, wanting only to be left alone. Instead, he is pulled from his solitary existence as an artist and tumbles headlong into the legend of Saint Nicolas.

As a young man, Nicolas accidentally killed a man intent on murdering three children, only to have the man's malicious spirit rise up against him. Fleeing through the centuries from the Krampus, the evil troll-like creature that dogs his steps, Nico finds refuge with the young artist who takes him into his home and bed. But Jamie has questions. Who is Nicolas, and why does the Krampus want to destroy him?

When the Krampus begins to torment and torture anyone Nico comes in contact with to punish him, Jamie’s life is put in danger. And Jamie isn’t sure whether he can help Nico defeat his nemesis or if he’s merely a pawn in the Krampus’s game.


Nicholas is available at Dreamspinner Press, Amazon, ARe, and Barnes & Noble 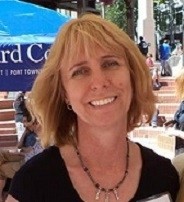 Dianne grew up in one of the older homes in the middle of Los Angeles, a place of hardwood floors and secret closets and back staircases. A house where ghosts lurk in the basement and the faces in the paintings watch you walk up the front stairs. Rooms where you keep the closet doors closed tight at night. It’s where her love of the mysterious and wonderful came from.

Dianne now lives in the beautiful Willamette Valley of Oregon with her incredibly patient husband, who puts up with the endless hours she spends hunched over the keyboard letting her characters play. She says Oregon’s raindrops are the perfect setting in which to write. There’s something about being cooped up in the house with a fire crackling on the hearth and a cup of hot coffee warming her hands, which kindles her imagination.

Currently, Dianne works as a floral designer in a locally-owned gift shop. Which is the perfect job for her. When not writing, she can express herself through the rich colors and textures of flowers and foliage.

Jamie woke with reluctance, not wanting to climb from the warm limbo he found himself in, feeling safe, secure. Arms pulled him a little closer, and he snuggled against the firm chest, resting his ear over the strongly beating heart. He wanted to stay there forever, but it soon grew stifling under the blanket; he pulled the edge down and blinked at the warm hazel eyes meeting his gaze. Who was this?
The stranger smiled and a hand crept out of the blanket, fingers brushing Jamie’s lips. “Angelo mio.”
What…. Memory surfaced, and he pulled back a little, face heating when he realized they were both almost naked, the guy lean and strong and… hard, against him. Feeling out of his depth with the man he slid further back, and fell off the edge of the couch onto his tailbone.
“Fuck. That was graceful,” he muttered, embarrassed. He knelt and rubbed his sore back, not looking up until the man chuckled. Expecting ridicule, the concern and warm light in his guest’s eyes tugged at his heart.
“Are you all right? Sounded like you landed pretty hard,” the man asked with sympathy.
“I’m fine.” Jamie grabbed his jeans from last night and pulled them on, feeling more comfortable after he’d tugged his sweater over his head. He turned back and caught the guy’s enticing lips twitching with a smile. Blushing, he laughed at his own nervousness. “Sorry. I don’t usually wake up naked with strange men in my bed.”
The man leaned up on an elbow, looking interested. “Do you usually wake up with strange men?”
“No!” Catching the glint of amusement in his eyes, Jamie laughed again. “Okay, enough teasing. At least tell me your name so I know what to call you.”
“I’m Nico De Mira.” He reached out a hand. “And you are….”
“Jamie Brannen.” They shook, Jamie enjoying the roughness of the man’s palm in his own softer hand.
“Thank you for saving me.” Nico turned Jamie’s hand over and stroked a thumb over his wrist, adding under his breath, “Tesoro mio.”
Jamie’s lips parted, but he lost his nerve to ask what he meant when Nico let go of his hand. Then concern swept him when his guest covered his mouth on a deep, wet sounding cough. The cough continued and Jamie dropped to the couch beside him, helping him sit up. The man seemed breathless when it at last subsided.
“Are you okay? Let me get you some water.” Jamie trotted to the kitchen. God, that cough sounded bad. Bronchitis, pneumonia, some kind of infection? Grabbing bottled water from the refrigerator, he returned to the couch and tried not to stare at his guest. The blanket had slipped off Nico’s shoulders, revealing a sculpted chest and arms; not blatantly muscular, but Jamie would enjoy putting his lips on them. It took determination not to drop to his knees and run his hands over that sleek Mediterranean body, feel the sparse, dark curls adorning the man’s chest under his fingertips.
Not trusting his resolve, he sat on the edge of the coffee table and handed Nico the water.
“Grazie.” The man drank thirstily and his hand shook when he returned the half-empty bottle.
Jamie nibbled his lips. “Is there anyone I can call to let them know where you are? Family or friends? Work?”
Nico shook his head before Jamie finished speaking. “There’s no one.”
Jamie had trouble believing him, but his curt tone warned not to probe further.

Enter to WIN a $5.00 giftcard to All Romance eBooks by commenting and leaving your email address below and tell Dianne of a favorite holiday tradition of your own. Happy Holidays! ! Dianne will pick a winner on Christmas Day so be sure to stay tuned!

Thank you for joining Dianne, me, and the Krampus (mysterious and sexy guy that he is)!
Hope to see you again soon!
Posted by Aisling Mancy at 3:00 AM