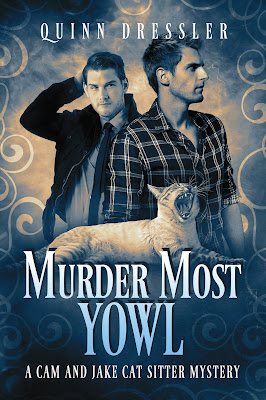 Join me in welcoming Quinn Dressler to my blog with a fantastic post on Writing Mysteries and her newest book, Murder Most Yowl!


Murder Most Yowl is out today from Dreamspinner Press, Amazon,
AllRomance eBooks, and Barnes & Noble

I’d like to thank Aisling for inviting me to talk a little bit about the mystery of mysteries. My new novel, Murder Most Yowl, is a gay romance and mystery all rolled into one. While I found the romance part was easy to write, planning a murder mystery was whole new challenge.

I’ve been reading mystery novels and watching shows like Murder She Wrote and Magnum P.I. all my life. Jessica Fletcher and Thomas Magnum always managed to catch the bad guy in just under an hour, so how hard could catching a fictional killer be?

I found out when I finally started tapping those computer keys.

First of all, when it comes to writing fiction there is really two ways to go. You could either meticulously outline your entire story, planning each plot point in great detail, or you could just start typing and let your characters roam free and let them dictate where your story goes. Writing by the seat of your pants, so to speak.

I’ve tried both ways, but found out the hard way that I prefer to be a “pantser” (yes, I made up that word. Two books ago I started writing with a detailed outline. When writing, I have the most fun making up the characters and developing the plot. I love seeing where my characters go and what trouble they get into.

Well, when I finished the outline, I found that I pretty much exhausted all of the fun part, and still had to flesh out the story with detailed description. While that’s fun too, this time since I already knew what was going to happen to my characters, I couldn’t keep my interest and abandoned that storyline.

I started again and ended up with a totally different, yet very much better book. That novel is still a work in progress, but should be done very soon.

So I learned that I’d rather write freeform, than figure out everything in advance. Great. That’s how I would write from now on... except when writing a murder mystery.

If you’re planning a fictional killer, there are three things you MUST know before you type your first letter. First, who the victim is, second who the killer is, and third, why did they kill the victim.

If you don’t know these three things you could write yourself into a corner, then rip up several pages of hard work to get yourself out. Also if you know the killer, you can more easily plant the red herrings to misdirect your readers onto other paths, before they can help your detective solve the mystery.

So, in order to write a good mystery, you have to start at the end, and work backwards, in part. For the rest of the tale I recommend letting your characters go run on their own. That makes for a fresher and more realistic tale.

Below is an excerpt from Murder Most Yowl. You can see how I did, and I’d love to hear your thoughts about mysteries, writing, or anything else.

Until we chat again!

About Murder Most Yowl

Cat-sitting is a dangerous business.

Cameron Sherwood turned his back on law enforcement the night his investigation led to the death of an innocent gay man. Now Cam spends his time running a business that caters to his favorite animal, cats. But when Cam stumbles upon the body of a friend while feeding her feline, he can’t walk away. Dealing with a sexy yet stubborn sheriff, a matchmaking sister, and a terrifying blind date, Cam must somehow track down a killer, all while keeping the cats around him fed with his gourmet cat treats.

Murder Most Yowl is out today from Dreamspinner Press, Amazon,
AllRomance eBooks, and Barnes & Noble

After going through another half-hour’s worth of footage, the kid stopped the replay and pointed to the screen. “Are you looking for this guy?”

His fingertip touched a black and white image of a man near our car. He was dressed in white sweats and wore a white ball cap, the brim shading his eyes. Nothing about him stood out, but my skin began to tingle.

“He could have just passed by our car on his way to the club,” Jake said.

On the video he whipped his head around, checking the area, then dropped onto the pavement, rolling under our car. He was out of sight for twenty-nine seconds. When he got to his feet, he shoved something into his pocket, then walked out of frame.

“I think,” Jake said, “that we just saw our brake line being cut.”

I tapped our young guide on the shoulder. “Can we get a look at his face?”

“The cameras in the lot are too wide. The front door camera could have caught him going in. Hang on.” The kid hit more keys and brought up the camera pointed toward the entryway. After some scrolling our guy came into view. We only had his profile—boy he had a big nose—but then a noise off camera made him turn his head toward the lens.

The kid punched a key so hard I was afraid it would break. Jake and I leaned in for a close look. Early forties, the guy was fairly good-looking, clean-shaven with gray or blond hair.

“Or Papa Moss either,” I added. “He looks nothing like the newspaper photos I’ve seen.”

Jake took in air all the way to his middle. “So some stranger tries to kill us?”

“We’ll have to ask him when we find him.” 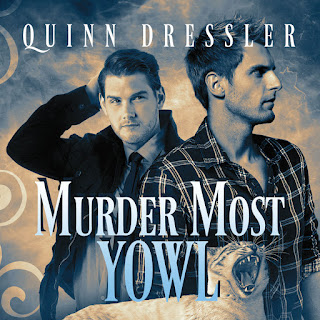 Quinn’s always been thinking up stories. A shy kid, she conjured up adventures while walking home from school. At first she only kept her tales to herself, then she shared them through fan fiction and short stories. She got a job with local TV stations, passing on noteworthy events to viewers on the evening news, winning a Golden Mic and three Emmy awards. Now as long as her cats don’t help her by walking on her keyboard, she’s working on writing more stories so everyone can enjoy them.

Find Quinn on her Blog, Facebook, Twitter @dressler_quinn, Goodreads, her Dreamspinner Author Page, and email her at QuinnDressler@gmail.com!
Posted by Aisling Mancy at 3:00 AM