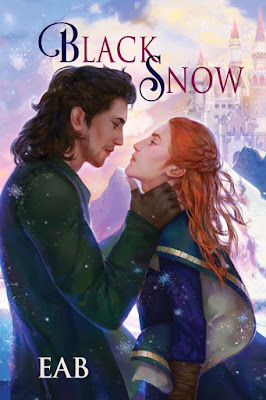 Join me in welcoming E.A. B to my blog with her debut novel, Black Snow,  out November 7th from Dreasmpinner Press! And don't forget to scroll down to enter the giveaway!
Pre-order Black Snow now from
Dreamspinner Press, Amazon, ARe, and Barnes & Noble


I want to thank Dreamspinner Press for publishing Black Snow and Aisling Mancy for hosting me here today. My cross country jetlag is doing its best to comatose me, but I managed to to crank out a blog I hope will be interesting to read.

For as long as I can remember I’ve been writing. I wrote my first full short story when I was nine, about the son of a plantation owner who befriends a slave. (No they didn’t fall in love.) Back then I had no idea that my writing would influence my adult life so heavily. There are so many people who want to write, but can’t find the right outlet or muse. I’m one of the lucky ones I guess.

Okay, on to the reason you’re here! My new novel, Black Snow. Where to begin...hmm...I guess I should start with the fact that Black Snow started as a role-play. No. Not the bondage and whip kind, although I’m not adverse to that, but it was a written role-play between myself and one of my partner's, Gabriel. We started Black Snow based on a picture. I was searching Deviant Art one day, and I saw a black haired adonis, mounting a red headed young man with symbols on his skin. I still to this day have no idea who these men were, but Gabriel and I fell in love with the picture and decided we had to play them.

Fast forward a year later. I had a 435 page role-play with great characters and a wonderful premise. However, this was 435 pages of dialogue, sex, and telling. Lots and lots of telling. Nonetheless, I wanted to transform Black Snow into a novel that others could read and fall in love with.

After I got permission from Gabriel to turn Black Snow into a novel, I gutted the story, and started from the foundation. I had to create new characters, redevelop our characters, rework the plot, and build a world for our boys to live in. I had to show readers why Roland and Brier’s story needed to be told. It wasn’t easy, especially since a lot of our role-play was based in imagination land. If it didn’t make sense, we didn’t worry too much about it, but Black Snow needed to be more than that, for myself, Gabriel, and for readers.

Another year later, it was finished. I had an unedited novel in my hand- well, on my google drive, but you know what I mean. After Gabriel pored over it, edited it for Dreamspinners eyes, and gave his seal of approval, I anxiously submitted my first manuscript to Dreamspinner. And now here we are close to its release on November 7th, 2016!

Thanks to all for reading,
EAB


Prince Brier Snow has lived in the shadow of King Snow’s exalted memory. However, his fate changes when he nears his majority and Lirend’s steward queen attempts to dethrone him by exploiting an obscure requirement in the late king’s will: a yearlong sabbatical.

Brier travels to the desolate land of Aire to train under the Ceve guild, scorned refugees of war, including their guarded leader, Roland. Brier’s skillful master unlocks hidden potential, and what begins as a dutiful bond turns into ill-fated affection. When Brier returns to the capital, he’s carrying proof of his indiscretions with Roland—and his condition grows more apparent with each passing day. An affair with the huntsman is a scandal Brier’s enemies can use against him, but the birth of an heir is a burden even Brier is not sure he can bear.

Roland Archer, a man with a murky past, is skeptical of the contract to train the prince but willing to do anything for the guild’s freedom. Despite his best intentions, he is smitten by Lirend’s future king. Roland has resigned himself to solitude, but fate has other plans—for him, for Brier, and for Lirend’s oppressed subjects. Can Roland help Brier face a power-hungry queen and a country torn asunder? Either they will bring equality to a land that desperately needs it, or they’ll be thwarted by cunning enemies and an illusory curse.

EAB is an airline steward/stewardess—depending on the day—who loves writing erotic fiction. This translates to serving Wild Turkey bourbon at 38,000 feet and writing smut at 3:00 a.m. EAB spends free-time role-playing and reading. While EAB’s true passion is writing, EAB also enjoys reaching high scores in nerdism, spending time with family (cats included), and watching anime. An East Coaster at heart, EAB loves New York’s Broadway and greasy, heartburn-inducing pizza. Feel free to drop a line or recommend some good reads! Always looking for a new book to devour! Find E.A. B on Facebook!
a Rafflecopter giveaway
Posted by Aisling Mancy at 3:00 AM