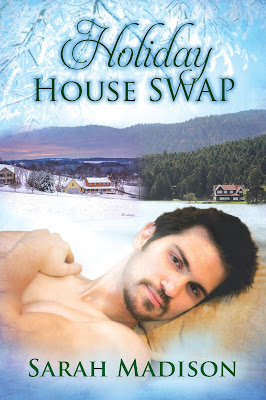 Join me in welcoming Sarah Madison to my blog with her newest novel, Holiday House Swap, releasing December 21st! Preorder now! And don't forget to scroll down and enter the giveaway!

Reclusive writer Noah Kinley is facing a dilemma: how to confess to the world he’s really the author of a best-selling romance series. For years, his friend Julie has been the face of his brand, but she wants her life back now. Fast running out of ideas for his popular series, Noah wants to break out into other genres. Not that he’s writing much of anything at the moment anyway, thanks to paralyzing writer’s block. With his publisher breathing down his neck for the next installment, he hopes a change of scene will get his writer’s juices flowing again. Desperate enough to try anything, during the holidays Noah swaps his isolated cabin in the woods for a gentrified horse farm.

USAF Major Connor Harrison has chosen forced retirement over facing charges for an unauthorized mission to rescue a buddy from behind enemy lines. No one expects him home for the holidays, and he certainly didn’t anticipate finding a stranger in his house, much less Noah Kinley with his acid tongue and a wry sense of humor that pierces all of Connor’s defenses.

Both men need to figure out what the next chapter in their lives will be—and whether it will include each other.

To his delight, a wall switch within arm’s length turned out to be for a sound system. He fiddled with the dial until he found a radio station playing Christmas music. He sank down into the bubbling water until just his toes and head were sticking out. Bing Crosby sang a rousing rendition of “Mele Kalikimaka.” Obviously another indication the station was getting desperate for different Christmas songs already. Then the playlist segued into one of many versions of “Santa Baby,” all of which Noah hated. Still, the sheer bliss of soaking in a steaming tub without having to cross a snow-covered porch to get there had him humming along when “The Twelve Days of Christmas” came on.

Noah had just belted out “five go-old rings” when he opened his eyes to see the bathroom door slowly swinging toward him. His jaw dropped in horror when he saw a soldier dressed in desert camo standing in the entranceway. The man had a 9mm in his hand and had used the barrel to open the door.
Noah couldn’t help it. He shrieked and flung the Kindle aside, ducking down into the Jacuzzi. It didn’t take him long to realize this wasn’t a workable escape plan, and he burst up out of the water, gasping for air. Blinking soapy water out of his eyes, he grasped the wine bottle by the neck and swung it overhead with the intent of throwing it.

To his surprise, while he’d been underwater, the soldier had holstered his gun. The man had also taken off his cap to reveal a shock of short brown hair practically sticking up on end. He was leaning against the sink with his arms folded across his chest. The overhead light made his eyes gleam like a cat’s, almost amber in color. His two-day stubble made him look like an extra from Miami Vice. Although he no longer acted as though he planned to shoot Noah, he gave off a dangerous vibe just the same.

“Calm down.” He was unimpressed by Noah’s defensive posture. “I’m guessing you’re not a burglar after all. Unless you’re the kind of thief who enjoys breaking into other people’s houses to take bubble baths.”

“I’m not a thief!” Fear sharpened into anger. “Your first clue should have been the Ford Fiesta sitting in the driveway. A real thief would drive something more impressive, like a black Hummer or something. The second tip-off should have been the fact there’s no evidence of a break-in, and the third should’ve been, I don’t know, perhaps my luggage sitting in the guest room?” Rage made his blood pressure go up like a rocket. “Whereas you came busting in here with a gun in your hand, so tell me, Lieutenant Soldier Man, why the hell I shouldn’t call the police right now?”

Noah noted his hand holding the wine was trembling, and he hastily set the bottle down. Awareness of his naked state, damp and only thinly covered by soap, made him ooze back down into the bubbles. He swept some toward him to cover strategic areas, all while glaring at the soldier.

“Well, I don’t know,” the military man drawled in a lazy manner that sent a little chill down Noah’s spine, even though he was hunkered down in the steaming water. “Maybe because I’m between you and the phone. Maybe because I still have a gun and you don’t. Or maybe—” The man pushed himself off the sink and took a step closer to the tub, pressing his fists into his hips as he leaned over to speak with emphasis. “Maybe because I live here.”

Noah gasped. “You do not!”
a Rafflecopter giveaway

Sarah Madison is a writer with a little dog, a big dog, an even bigger horse, too many cats, and a very patient boyfriend. An amateur photographer and a former competitor in the horse sport known as eventing, when she's not out hiking with the dogs or down at the stables, she's at the laptop working on her next story. When she’s in the middle of a chapter, she relies on the smoke detector to tell her dinner is ready. She writes because it’s cheaper than therapy.

Sarah enjoys placing hot men in hot water to see how strong they are—like teabags, only sexier. This motto allows her to play in a wide variety of genres, from FBI guys to shifters, with some WW2 fighter pilots and space adventurers tossed in for good measure.

If you want to make her day, e-mail her and tell you how much you like her stories.

Posted by Aisling Mancy at 3:05 AM