#Exclusive #Interview with Robin Reardon about Her Newest Novel Waiting for Walker & a #Giveaway! 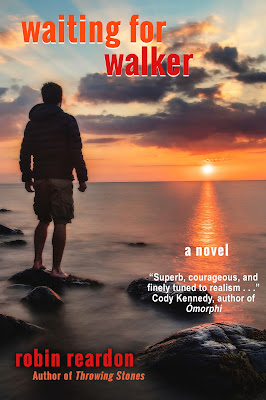 It's my great pleasure to have Robin Reardon on my blog today, and she was kind enough to allow me to interview her. Her newest novel, Waiting for Walker, is a wonderful story and I can't recommend it highly enough. So much so, I wrote a foreword for the book. Check out my awesome interview with Robin and don't forget to scroll down and check out the give-away! FIVE lucky people will win an ecopy of Waiting for Walker!
Waiting for Walker is now available for pre-order
at Amazon, Barnes & Noble, Kobo, and GooglePlay
(Print edition available through Amazon, Barnes & Noble, & IngramSpark.)
Ash: Let's start right from the top. How did you get into this area of fiction?

Robin: I'd almost have to do a bullet list to give you the full picture. In fact, maybe I'll do that.


Ash: Have you written in a form other than novels?


Robin: I contributed a short story (Giuseppe and Me) to author Brent Hartinger's Real Story Safe Sex project, and I contributed a novella (A Line in the Sand) to a project benefitting The Trevor Project.


Before writing novels, I cut my proverbial teeth on short stories, which I started with because I thought they'd be easier to write than longer works. I, uh, I was wrong. What I found was that if you can write a good short story, you can write anything.

Ash: Why is that?


Robin: In a short story, you must be exceptionally concise, and you must communicate your character(s) immediately, clearly, and believably. And then you must (concisely; have I said that yet?) describe a situation or event that causes the character to change in some way that is not exactly predictable but that is believable according to the initial character sketch. And you must do all this in as few words as possible. Or, to put it in even fewer words, you must write clearly and concisely. It was the best thing I could have done.

Ash: How hard was it to get your first novel published?


Robin: When I wrote A Secret Edge, I didn't even know I was going to try and publish it. I'd paid my dues practicing on short stories, and I wanted to see if I could write a novel. So I did. Then I heard a voice in my head. "Hey, this is pretty good. Maybe I should see if I can get it published."

When I looked into the process, I decided right away that I didn't want to negotiate with a publisher on my own, which meant I needed an agent. It took me a year to find a good agent. It took him six weeks to get me a two-book contract.

Ash: What do you like best about your writing process?


Robin: Research. I know, I know, that makes lots of folks cringe. But every time I start a new story, my characters end up with something (or several things) about their lives that I have to describe, things about which I know little or nothing—and often aspects I didn't plan for them to have. And because this keeps happening, and because I keep letting my characters tell me about their lives, I guess I must like research.
For example, in Educating Simon, Simon has synesthesia. In his case, he sees letters as having colors, but that's just one form of the condition. Also, he's English and speaks (and spells) in English English. He knows someone who's in Straight Edge. He's applying to Oxford University (a protracted process I had to... um... study to understand). He has an autistic step-sister. He's coaching a younger person to compete in the National Scripps Spelling Bee. And that younger person is trans.

Ash: You've included trans and bi characters in some of your stories, not just gay teens.

Robin: And there's an intersex teen in my newest book, Waiting for Walker. This condition is much more common than most people realize, and it's misunderstood (understatement) even by most people who've heard of it. I researched it enough to write my character, Walker Donnell, but I wouldn't presume to describe it accurately. Author Cody Kennedy wrote a foreword for the book that provides a long list of informational resources, including a video that's a great starting point.

I'm fascinated by the difficulty most people have in accepting differences around sex and gender. And I really, really, really (writing coaches will tell you not to use "really" even once, but I'm not big on rules) want LGBTQ people, and teens especially, to know that the only thing wrong with who they are is how some people treat them when they find out.

Ash: You said your characters end up with traits and life situations you didn't plan. How does that happen?

Robin: They tell me. When I was writing Thinking Straight, I got stuck at one point when Taylor and his roommate, at the "ex-gay" camp they were in, were separated into different room assignments. The story ground to a halt. I leaned back in my chair, stared at the screen, and said (I think silently, but I can't be sure), "Okay, Taylor. Where did I go wrong?" It was almost as though he reached a hand out from the screen, took mine, and led me back to that split. "Here," he told me. "This is wrong. We stay roommates." And they did. And it worked. The story practically flew forward after that.

In The Revelations of Jude Connor, I had no plans to kill anyone. And if I had thought of killing someone, it wouldn't have been my favorite character. But that character knew better. I cried every time I re-read that murder during the proofing process, but I knew I couldn't change it. The character was right.

Ash: Do you work from an outline?


Robin: No. Lots of people do, and if that works for them, they should do that. But I've found that the more structure I have in my head or on virtual paper before I start writing, the more stilted the process feels, and the more straight-jacketed I feel. I think too much structure makes it hard for my characters to define themselves, and I need them to have the freedom to do that.

Ash: Do you have any advice for would-be authors?


Robin: Write. Write some more. Read what you've written. Read it aloud. Give it to someone else to read, someone who'll be honest with you. Edit. Read again, watching for places you know (and you will know) are rough or awkward. Fix those places. And if those awkward places include language or phrasing or ideas you're in love with, too bad; delete. Read aloud again. When that work is complete, write something else.

Ash: What's next? What are you working on now?


Robin: I'm taking a chance. Two chances. Well... three. First, my next work will be a three-book series. I've never done a series, although many readers have asked for sequels to their favorite books.

Second, my main character will be older than in any of my previous works. He'll be a college freshman for the first book and in his mid-twenties when the series ends.

Third, rather than buying stock photos for the covers, which I've done in the past, I'm working with a photographer for all three. It was important to me to maintain my esthetic brand (which I think is evident if you look at the covers of most of my books); that means a photograph rather than artwork. But it also means using the same model for all three covers, getting him to age appropriately. I've agreed on a contract with this photographer, but it isn't officially signed yet, so all I can tell you for now is that the he's is young and delightfully edgy.

Ash: What will the title of the series be?


Robin: The series title is A Natural Man. Each book will have its own title. And I'd tell you what those are, but sometimes titles change during the writing process.

Ash: When will we be able to buy it?


Robin: I'm hoping for a release date in the first half of 2018. But somehow my books always seem to take longer to write than I think they're going to. Maybe it's all that research.
And maybe there'll be an interview to announce that launch, and we'll have to come up with a different headline. Because my teens will have grown up.

LUCKY WINNERS!
The first five people to contact Robin Reardon and include a mention of this post along with their email address will receive a digital copy of Waiting for Walker in their choice of mobi (Kindle) or epub format.
About Waiting for Walker
Micah Jaeger's life is a mess. His folks have split, and his mother is seeing a medium to communicate with Micah's older brother, killed in . He had to change schools for his junior year, and he retreats further into himself, hiding behind his camera—and hiding that he's gay.
One sunny day in June, as he's shooting a dead seagull on the Sound, a mysterious guy appears in a beautiful sailboat. At first, the guy's boat shoes are the image that stays with Micah. But soon it's the person himself, Walker Donnell, who haunts Micah's dreams.
's life looks perfect to Micah. His wealthy parents adore him. He has everything he could want. He's gorgeous and generous. And he falls hard for Micah. But he has a secret: is intersex.
The closer Walker and Micah grow, the more feels the need to be sure of himself in ways he hasn't fully faced before, and now it's his turn to retreat. Micah knows is worth waiting for, so he waits. And waits.
Waiting for Walker is now available for pre-order
at Amazon, Barnes & Noble, Kobo, and GooglePlay
(Print edition available through Amazon, Barnes & Noble, & IngramSpark.)
About Robin Reardon

Robin Reardon is an inveterate observer of human nature, and her primary writing goal is to create stories about all kinds of people, some of whom happen to be gay or transgender--people whose destinies are not determined solely by their sexual orientation or identity. Her secondary writing goal is to introduce readers to concepts or information they might not know very much about. Interests outside of writing include singing, nature photography, and the study of comparative religion. Robin writes in a butter yellow study with a view of the Boston, Massachusetts skyline.
Find Robin on her Website, Goodreads Author Page, Goodreads Book Page,
Facebook Author Page, and Twitter @TheRobinReardon
Posted by Aisling Mancy at 10:00 AM