Meet Rio from Jackie Keswick's "The Power of Zero"! 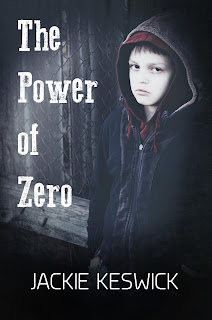 Join me in welcoming Jackie Keswick to my blog with her newest novella, The Power of Zero, a Prequel to the Power of Zero Series! Check out this awesome interview of Rio!

Bu' jus' to be neighbourly an' all, I'll talk to you about Jack. 'Cos he's somethin' else.

Bu' tha' first question on your list right here? Why did you offer a kid squatting in your basement a home? Tha's the kind of question tha' tells you who your friends are. Nobody who knows me - an' is in their right mind - would even think of askin' me tha'. They all know how I'm built.

And Jack wasn' jus' any kid.


Breakin' into my house took serious guts. An' he didn' break in to steal stuff, either. He needed a safe place an' who am I to deny him tha', eh? Everyone needs a safe place, however fortunate we are. Don' you like to hide in bed sometime, whether it's with heartache, a cold, or a favourite book? Imagine you didn' have tha'. Wha' would you do?

Tha's another thing about Jack tha' chokes me up. He chose life on the street over life with the pimp his mother sold him to. No' many people have tha' kind of courage. An' he still had enough heart left to try an' help others.

No' tha' I knew tha' at the beginnin'. Gettin' to know Jack was like gettin' to know a feral cat. You have to do tha' slowly an' carefully or you'll get scratched an' bitten. I did. Figuratively speakin', of course. I got too close too quickly one day, only tryin' to help, mind. Bu' it scared Jack an' he ran. Worst few weeks of my life. I knew he was out there, all alone an' hurtin', an' I busted a gut to find him again. An' yeah, I was almost too late an' tha' scared the socks off me, I can tell you.

Bu' we got over it. An' Jack... well, he never bothered with school. Never trusted anyone enough for tha'. Bu' he's smart. He studied at home, an' then he started to help me. Gettin' him involved with my kinda crap wasn' perhaps wha' anyone else woulda thought good for him. Bu' I knew. Jack was good at sneakin' around, an' he wanted to help, so I let him.

An' look where he's now. He an' tha' chap he's with, Gareth, they rescued two kids a few months back. So the boy who started out with a mother who didn' deserve tha' name an' nobody to look out for him, now has a family an' two kids of his own. All because he had the courage to accept a bit of help.

Right. Wha' else did you wan' to know?

Green, I think. The greener the better. Actually, scratch tha'. He does like really dark greens, bu' I think he has a thing for tha' silver green leather Hotshot makes shoes and jackets from. I'd swear I've seen him in one just the other day. It's the same colour as his eyes, and it looks badass.

Once upon a time, tha' would have been green apples and pizza and hot chocolate. No' all at the same time, of course. Then he discovered coffee - round abou' the time all the coffee shops started up - an' tha' was tha'.

An' you know wha'? I'm no' gonna get into a music discussion with you all. I'm no' tha' patient. Wha' I will say is tha' when I met Jack he'd been told over an' over tha' he was nothin'. Nobody of consequence. A zero. An' when I told him tha' it's good to be a zero, he looked at me as if I was mad. I meant wha' I told him, though. Zeroes have power. They can change things. An' now tha' Jack's learned tha'... well, you don' wanna mess with him or anyone he cares abou'. Just sayin'. ;-)

ABOUT THE POWER OF ZERO


When a homeless boy meets an ace hacker…

Twelve-year-old Jack Horwood has run from the pimp his mother sold him to, preferring to take his chances on the streets. A house with a cheerful red door – and a classic convertible out front – prompts him into a spot of breaking and entering, and soon he has a warm, dry basement to squat in.

Until the owner of the house, Jamaican hacker Rio Palmer, discovers his hideout. Rio offers him a safe place to stay, but Jack doesn’t believe a word the man says and runs.

Rio can’t forget the youngster who is scared and vulnerable, and stronger than many men Rio has met. Finding Jack is a tiny challenge. Teaching him to trust is like climbing a mountain. But when faced with a true zero and its power, Rio can do nothing else.

ABOUT THE POWER OF ZERO SERIES


Jack Horwood has not had a home since his mother sold him to a pimp, has not had a family since he walked out on his Army career. Now he spends his days chasing secrets for MI6 and his nights chasing pimps and men who buy children for sex, seemingly content until Gareth Flynn, his former

Army CO and the man he fell for when he was seventeen, walks back into his life.
Suddenly endings turn into new beginnings, two scared, abused boys need his help, and his past won’t let him go even as he tries to make a new life for himself.

You don’t greet your new boss dressed like an underage rent boy. But when Jack Horwood—ace hacker and ex-MI6 operative—opens the door to Gareth Flynn, he’s too busy to worry over details like that. And anyway, his potential new boss is his former Commanding Officer – the same guy Jack has had a crush on since he was seventeen. So he should understand, right?

When he applied for a job in Nancarrow Mining’s corporate security division, Jack had hoped for peaceful days repelling cyber attacks. Maybe a bit of corporate espionage on the side. His plans didn’t include rescuing abused children, hunting pimps, or dealing with his overly protective and hot-as-hell boss, Gareth Flynn

Walking away is not an option. Jack never takes the easy way out. More than that, meeting Gareth raises old ghosts that Jack needs to put to rest. Rescuing kids. Taking risks. Saving the day. Jack can do all that – but deciding what to do about his attraction to Gareth isn’t the sort of cloak-and-dagger game Jack plays well. Yet Gareth, strong and smart and always on hand when needed, might be Jack’s salvation.

Jack Horwood doesn’t do families. Or Christmas. From the time his mother sold him to her pimp to the moment he walked out on the man he loved, Christmas has always been about change and painful choices. This year seems no different. Helping Daniel and Nico recover from their imprisonment and hunting down those responsible puts Jack in a frame of mind he doesn’t want to inflict on anyone. Least of all Gareth and the tentative relationship they’ve started to rebuild.

But Gareth, for whom Christmas is all about new beginnings, won’t let Jack take the easy way out. He makes him face his ghosts instead. Even when said ghosts invade their bedroom.

When Daniel’s parents are found, Jack is determined to settle the matter without involving Daniel at all. But fate decrees otherwise, and it’s Gareth who helps him finally understand that the strongest bonds are those forged together. Once he gets that, Jack can step up and make a decision designed to lay his ghosts to rest—for good.

Jack Horwood hates owing favors. But when a simple day out to treat Gareth to the best oysters in England leads to a discovery of drugs and counterfeit money—things that neither Jack nor Gareth have the jurisdiction to handle—he has to call in help. Help that forces him to do something he promised himself he’d never do again—walk away from Gareth and the family he’s starting to make for himself.

Three months undercover is a long time. After missing Gareth’s birthday, Jack is determined not to miss their first anniversary. But coming home and being home are two very different things. So when he is asked to assist with a corporate espionage investigation, Jack can’t say no, despite knowing it will impact his already straining relationship. Except, of course, he’s walking into a trap….

Available in paperback, ebook, and audiobook from
Dreamspinner Press and all general retailers.

Jack Horwood doesn’t do things by halves. Once he’s decided to build a home and family with Gareth, Nico, and Daniel he’s all in, whether that means helping with homework, arguing with banks and builders or taking care of Gareth, who is snowed under with work and his freelance job for Aidan.

Stressed, tired and barely home, Gareth doesn’t believe that Jack finds looking after his home-made family as enjoyable as he claims. Doubts creep in and arguments soon follow until Jack organises a weekend break in Northern Sweden just for the two of them to sort out their issues.

What starts as a good idea turns into a murder hunt when they discover a dead body, frozen into the “furniture” of the famous Ice Hotel, and both Jack and his friend Oskar are implicated in the dead woman’s disappearance. Jack can only watch from the sidelines as Gareth steps up to help solve the murder, sure that it will bring all Gareth’s doubts back full force and put him once more on a collision course with Jack and their feelings for each other.

Jackie Keswick was born behind the Iron Curtain with itchy feet, a bent for rocks and a recurring dream of stepping off a bus in the middle of nowhere to go home. She's worked in a hospital and as the only girl with 52 men on an oil rig, spent a winter in Moscow and a summer in Iceland and finally settled in the country of her dreams with her dream team: a husband, a cat, a tandem, a hammer and a laptop.

Jackie writes thrillers, suspense, sci-fi and fantasy - often with love stories built in. She loves unexpected reunions and second chances, and characters who don't follow the rules when those rules are stupid. She blogs about English history and food, has a thing for green eyes, and is a great believer in making up soundtracks for everything, including her characters and the cat.

And she still hasn't found the place where the bus stops.

For questions and comments, not restricted to green eyes, bus stops or recipes for traditional English food, you can find Jackie Keswick in all the usual places: