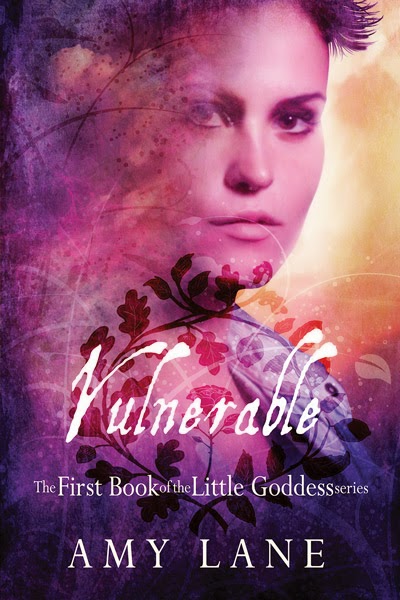 Join me in welcoming Amy Lane's Vulnerable, Book One in the Little Goddess Series from DSP Publications!

I have to tell a short story here, which I'm fairly certain neither Lisa or Amy will remember. Back in September, 2013 when I was preparing for the release of Omorphi, I was in a conversation with Lisa Horan at The Novel Approach Reviews about setting up a date for the book tour. During this conversation, Lisa and I discussed our favorite authors and, of course, Amy's name came up. At the time, Lisa said she would LOVE to have Amy on her blog. I offered to ask Amy to contact Lisa about it. This was rather stupid of me because the only exchange I had had with Amy to that point was a brief Facebook PM over pseudonyms! Having absolutely no incentive whatsoever to do so, Amy took my request, contacted Lisa, and visited The Novel Approach! Holy sh*t! Amy Lane took my request!!! Lisa was thrilled!

Enter the here and now. I have a new Young Adult novel releasing in April and I asked Amy if she would be part of the book tour and she agreed! *faint* Can you believe it? Holy mackerel! Amy Lane on my book tour! It's Amy Lane!!!

It's no secret that I grew up in Hollywood and know some pretty famous people and some damn good artists, be they authors, actors, directors or producers; and I'm not one to fanboy over fame. But I am a total fan of something else: kindness. Amy Lane ranks at the top of my list of idols because she isn't only an expert at her craft, she's one of the kindest people I have come to know. And it shows in her writing. Her stories are incredibly imaginative, full of heart, and rich with the texture of storytelling. Don't miss out on the re-release of Vulnerable. The Little Goddess series is a must read series. Here's to kindness and Amy Lane's books!

And, OMG! Amy Lane is in my upcoming book tour! OMG!

Working graveyards in a gas station seems a small price for Cory to pay to get her degree and get the hell out of her tiny town. She's terrified of disappearing into the aimless masses of the lost and the young who haunt her neck of the woods. Until the night she actually stops looking at her books and looks up. What awaits her is a world she has only read about—one filled with fantastical creatures that she's sure she could never be.

And then Adrian walks in, bearing a wealth of pain, an agonizing secret, and a hundred and fifty years with a lover he's afraid she won't understand. In one breathless kiss, her entire understanding of her own worth and destiny is turned completely upside down. When her newfound world explodes into violence and Adrian's lover—and prince—walks into the picture, she's forced to explore feelings and abilities she's never dreamed of. The first thing she discovers is that love doesn't fit into nice neat little boxes. The second thing is that risking your life is nothing compared to facing who you really are—and who you'll kill to protect.