Welcome Rob Damon and his debut novel "Into the Team" from CoolDudes Publishing! 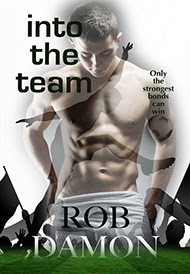 Join me in welcoming Rob Damon and his debut novel, Into the Team, to my blog! Into the Team is now available at CoolDudes Publishing and Amazon.

As experienced authors, the memory of the publication of our first novel reigns supreme in our minds. Along with the good comes the fear, anxiety, and the tension. I like to congratulate new authors on, well, becoming an author! It's hard work. Congratulations, Rob!

Enjoy the sexy excerpt and go buy the book!

A little about Into the Team:


Todd, the main character in the novel, has a lot of drive, is optimistic, and chases his dream of becoming a professional footballer with complete focus. Those are admirable qualities, and everyone is inspired by stories of personal achievement.

Into The Team blurs the lines between gay/straight, romance/bromance. And so the idea of a football team, where players must bond with each other, is perfect. Into The Team shows that when men hang up their aggression and turn on their affections, great things can be achieved.

Of course, achieving a dream cannot come without a price, and within the story there are tests the main character must face. How far would he go to not just achieve his dream, but also to maintain it?

The novel takes male bonding to an extreme, and the idea of bromance is pushed further to create something more like romance.

Are the characters in this story gay? Should any of us really care? Love can grow between any two people, male or female, gay or straight.

About Into The Team


To honor his father, young footballer Todd Mackerson commits to his goal of playing for a professional team. When, at the age of 20, he is offered a place to train with one of England’s biggest clubs, he leaves home convinced his dream is within reach.

But, after experiencing the care and attention men can give to each other, Todd feels awakened. Learning that each player has a special “partner” on the team, who they play and bond with as intimately as lovers, Todd becomes fascinated with the idea.

And when he develops feelings for one player in particular, he discovers how a stronger kind of romance – that between two men – can be pure and powerful enough to bring magic and success on the pitch.

A bachelor of science (Computing), Rob worked as a software developer for over 15 years before turning his full time attention to learning the craft of writing. His love of science drew him into science fiction, but his love of man drew him to the MM genre. With his strategy of thinking differently, he aims to bring something to the market that pushes the boundaries.

Rob was born and raised in Manchester, England. Spent seven years living in London, but now lives back in his home city. Interests include: reading, film, weight training, and learning all he can about people – what makes them tick, what motivates them.

Into the Team is his debut novel.