Welcome Lloyd A. Meeker with an Exclusive Excerpt from his Newest Novel "Traveling Light"! 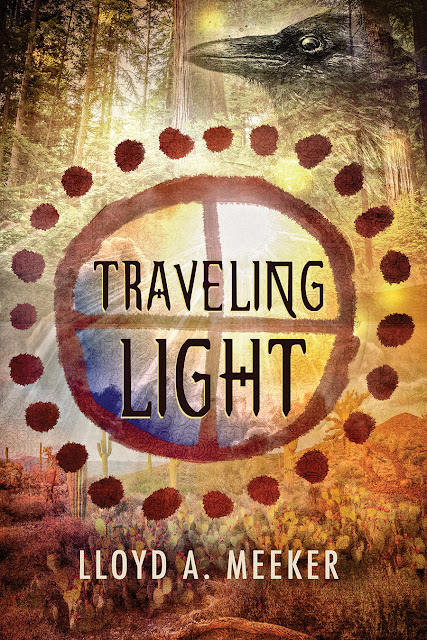 Join me in welcoming Lloyd A. Meeker to my blog with an Exclusive Excerpt from his newest release, Traveling Light, from DSP Publications!

About Traveling Light
An eye for an eye….

Ian McCandless is a hospice nurse, training to become a shaman. When his mentor orders him to make peace with his estranged family, Ian reluctantly agrees, anticipating another conflict-filled visit. On their way from the airport, Ian’s older brother Will interrupts a convenience store robbery and is shot. As he dies in Ian’s arms, Will begs Ian to avenge him.

Ian uses his shamanic abilities to track down the killer, but his quest soon becomes a hunt for revenge—forbidden to any shaman. His actions jeopardize his relationship with the spirit-world, endanger the lives of those he loves, and threaten to banish him from the path that gives his life meaning. Ian must choose between vengeance and service to community as the root of his shamanic covenant. Evil or noble, every choice is sacred to the Great Web, and every choice has consequences.

Ian has just broken up with his long-term lover Sam, for whom Ian’s shamanic work has always been a problem. Instead of spending the rest of the night with Sam, Ian has returned to his own apartment.

~*~
He was on his own. As long as he could remember, he’d always had someone he could call and talk to. First his parents, and then Will before he got too pushy, as if Ian was obligated to him for rescuing him from his high school harassment, then Ang or Sam. He’d always had someone else to listen to him, to help him think things through—and now he didn’t. It wasn’t as though he always had talked things over with someone else, but someone had always been there when he’d wanted to. Now there was no one, no matter how badly he might want that tonight.
Part of him, hurting, wanted to call Sam and tell him all the hocus- pocus stuff was over and that he wanted to come back over tonight, but he knew he wouldn’t. He loved Sam, and if he lost him, he’d hurt for a long time. But he’d already decided—long ago—to take the path he was on. He’d made that choice even before he’d met Sam. It hadn’t seemed so important or far-reaching then, but now it overshadowed every other aspect of his life, such as it was. And that was just the way he wanted it.
As Ian poured himself a glass of water from the filter jug, he wished vaguely that he still drank alcohol—he’d quit years ago on Ang’s instruction. No, that wouldn’t help solve anything, either. He might not get much sleep tonight, but at least he knew where he was headed— straight into the unknown, alone, and without a clue. By his choice.
Ian sat on the floor with his back against the love seat. Maybe some meditation time was in order. Yes. He’d sit in the overlapping of the worlds, declaring his rightful place in both, and let guidance come as it might.
He closed his eyes; his breathing slowed and deepened. As they had countless times before, the rich essences of the All-That-Is wove gently around and through him, supporting, nourishing, filling. Thank you, Ian sent into the silence. Thank you. Guide me, please, and help me keep open to your guidance. Please show me what I need to know to walk my path in a good way. After a while, a harmonious reassurance came—and, if not exactly peace, then at least the possibility of peace. It felt good.
When he was finished, Ian got up and got ready for bed. Eventually he slept. And dreamed.

About Lloyd A. Meeker


Lloyd Meeker can’t help what he writes—stories arising from the between places, the mystical overlapping between the worlds of matter and spirit, and the sentient, unpredictable beauty that dwells there. It’s his natural habitat.

Happily ensorcelled by music, subtle energy healing, and the wonders of nature, he lives with his very understanding husband in southern Florida, among friends, family, and orchids that take his breath away every morning.

In addition to his written work, which includes novels, essays, poetry and short stories, he has served since 2008 as a final-round judge in the Queer Foundation’s annual National High School Seniors Essay Contest, which promotes effective writing by, about, and/or for queer youth, and awards scholarships to the winners. Finalists are selected from schools across the United States by members of the National Council of Teachers of English.

His novel The Companion was named a finalist in the 2015 Lambda Literary Awards, and is the author of other popular titles, including Blood and Dirt, Enigma, Blood Royal, and A Cape of Good Hope Christmas.