#Giveaway! Welcome to the Blog Tour for Meg Harding's Will You Be My Escort, Book 2 in The Carlisles Series! 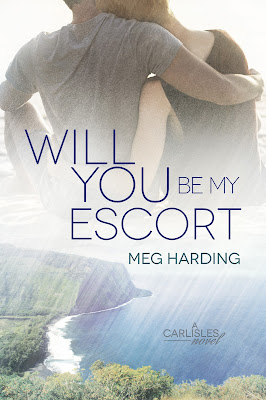 Join me in welcoming Meg Harding to my blog with her newest book, Will You Be My Escort, Book 2 in The Carlisles Series! And Don'to forget to scroll down to enter the Giveaway!


Will You Be My Escort is available now at Dreamspinner Press,
All Romance eBooks, Amazon, and Barnes & Noble

About Will You Be My Escort, A Carlisles novel


Jackson Carlisle has rotten luck with men and women, and after an especially bad situation, he takes a step back from romance. But with a two-week family reunion in Hawaii looming, his mom is determined to set him up with one of the sweet singles she knows would be perfect for him. A normal person would tell her no and be done with it. Instead, Jackson tells her he has a boyfriend. The only problem? He doesn’t.
Aaron Wilkes is an escort. He’s a little surprised when a friend’s girlfriend hires him to date her brother, but he’s had stranger jobs. Jackson is cute, and he thinks a fling with Aaron might be just the kind of no-strings-attached fun he needs to get over his dry spell. As they explore the islands together, their carefully laid plans begin to get away from them. Feelings aren’t supposed to come into play, but that shouldn’t be a problem. After all, you can’t fall in love in two weeks….

Meg Harding is a graduate of UCF, and is completing a masters program for Publishing in the UK. For as long as she can remember, writing has always been her passion, but she had an inability to ever actually finish anything. She’s immensely happy that her inability has fled and looks forward to where her mind will take her next. She’s a sucker for happy endings, the beach, and superheroes. In her dream life she owns a wildlife conservation and is surrounded by puppies. She’s a film buff, voracious reader, and a massive geek.

Find +Meg Amor on her Blog, Facebook, Twitter @Cumberstone61,
the Dreamspinner Author Arcade, Amazon, Goodreads, and G+!
a Rafflecopter giveaway
Posted by Aisling Mancy at 3:00 AM