#Release Day! Welcome to the release of Caraway Carter's "7 With 1 Blow" and an EXCLUSIVE excerpt and article about SAFEWORDS!

Join me in welcoming Caraway Carter to my blog and the release of his newest novel, 7 With 1 Blow! Thank you for joining us today, Caraway!

Thank you for hosting me today, Ash. I’d like to kick off this special post about "Safewords" with an exclusive excerpt from 7 With 1 Blow.

Eventually, he fell into a drifting, restless slumber, chased by dreams where he was repeatedly humiliated on a stage in front of his former boys and his current Scene followers. In one dream, instead of the boys taking their proper punishments, they were punishing him, laughing at him as he protested— the same way he’d always laughed at them if they were stupid enough to try to use a safeword. Safewords were for fakers, for posers. His boys didn’t have safewords. Now, neither did he.

Safe words are important. And anyone who tells you different, is someone you need to not be around. In 7 With 1 Blow I utilize the stoplight safe words.  Green means Go, I love this. Yellow means, slow it down. Red means, stop it now. And I’ve added Blue, which means, I’m having a medical emergency.

Sometimes people choose safe words and they either aren’t heard or the person using the safe word decides they don’t want to use it. I made the mistake once of using uncle for a safe word, and at the time I could never imagine saying uncle ever, not even if I was in pain or too much pain, I just couldn’t come to grips with the fact that I said I wanted to bring my uncle into that scene.

I recently read an article on negotiations; both the Dom and the sub need to be honest with each other, because the sub might have a different slow down in their mind. So, you need to be very specific with what you want and don't want, and how much.

If you're at GRL today, be sure to speak with Caraway! He is one of the nicest authors I've had the pleasure of coming to know and is awesome to speak with! 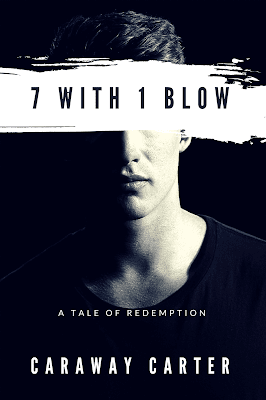 In this tale of redemption, Taylor must face his demons as he learns to accept his status with mouth, mind, and heart.

Excerpt
The man of the evening arrived—late as usual, but no one was surprised. It was just his style. During his few short years in the Scene, Taylor Little had gathered quite a following between customers, hangers-on, flatterers, and the occasional scene partner. It wasn’t the most experienced or the most prestigious crowd in the local Scene—in fact, many of Little’s followers were even less experienced than he was—and people had noticed. Important people, people who could make or break a new Dom.

His lateness was also par for the course. Taylor Little—who called himself “Dom Seven”—made his elaborate entrance. Normally, his slaves crawled before him, regardless of the venue or whether it was appropriate. The sharper-tongued members of the Scene whispered that it was because of his height, which, even with his heavy boots, topped out at five foot seven. But this time, his current slave walked in front of him, shirtless, his neck enclosed inside a black leather collar. A chain snaked away from the collar’s single jump ring and into Taylor’s black-gloved hand.

In an uncharacteristic nod to propriety, Taylor had had this slave wear dirty white Converse tennis shoes and tight black jeans, with a thick black leather belt. As they entered the room, a scowl crossed Taylor’s face. It were as if no one had paid attention to anything he had done with his slave; the crowd was still looking at Mistress Joan.

Taylor and his slave were the only ones not looking at Mistress Joan. Instead, Taylor looked around the room to see if anyone was checking out his new boy while the slave kept his own eyes focused on his shoes. Not a single soul was looking their way. With a frown and a muttered command, Taylor tapped the slave on the shoulder. The boy nodded his head and dropped to his knees as Taylor looked around for an open chair. As the boy fell to the ground, the door of the backroom swung shut so that no one, aside from those gathered in the room, was witness to the slave boy’s further humiliation.

Caraway Carter has worn numerous hats. He's been a furniture salesman, a dresser, a costumer, an actor/waiter, a rabble rouser, a poet and most recently a writer. He married his husband on Halloween and they are the loving parents of an adorable cat, named Molly. He loves words and stringing them together, he loves sex and sexy men. He loves seeing how far his muse will take him and he's looking forward to entertaining you.