Turn the Page, a donation anthology to benefit The Trevor Project, UMW Cares, and Prevent Suicide is OUT NOW! 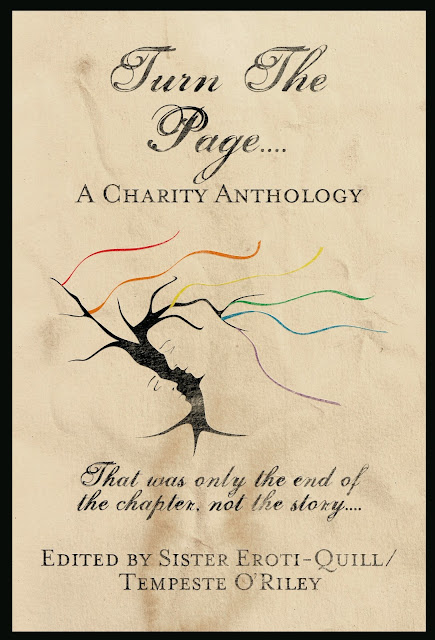 That was only the end of the chapter,
not your whole story....
Turn The Page....

About Turn the Page


Turn The Page.... began as a simple idea and grew from there. No matter how bad things seem to be, just turn the page, there’s more—better—things to come. This is only one chapter in your life. It’s not the whole story. With this simple idea, Novice Sister Eroti-Quill—whom most know better as Tempeste O’Riley—began their quest to help Suicide Prevention and Awareness programs in their area. They managed to con (excuse me, convince) other authors to donate their time and stories to the project, and now, many months later, Turn The Page is born!
The authors in this anthology donated their talent as a way to support Eroti-Quill’s hope for others, to help bring strength to programs that so desperately need funding. It will allow them show those that need support but may not have it, or that may be afraid to reach out, just how much love and understanding surrounds them. Turn The Page.... is a diverse range of stories about the journey of love, hope, and acceptance.

Programs Helped by this Anthology

Happy Birthday to Me by Tempeste O’Riley

How can Robin find true love without accepting himself first?

Sasha's love was in imminent danger. All she wanted was to keep Tori safe. Stay at the cabin wait for the verdict from the council. That’s all they had to do. One little dip in the lake couldn’t hurt could it?


Gylam’s never been that great at communication and this time he’s gone too far. His penchant for keeping his mouth shut resulted in a disastrous trip to the local dungeon. Jackson, his partner—both cop and at home—and Dom, is well familiar with Gylam’s tendencies. The punishment he gives Gylam is just shy of his limits, but Gylam knows he’s earned it. It remains to be seen if it teaches him anything, though.

Ducks in a Row by Sue Brown


David spends his afternoons feeding the ducks, a peaceful activity until the day Jeff and his Labrador dog burst into his life. David and Jeff get to know one another, punctuated by Bozo's mishaps, but David is unwilling to share all his secrets. Will Jeff give him the time he needs?


Kyndra visits Jaiden’s shop for a little birthday shopping but is there for more than the pretty blown glass designs she makes—lovely though they are. What she really wants is a date with the beautiful craftswoman. But can she push her fears aside and ask, or will her past get in the way? With Jaiden’s help, can who Kyndra is inside finally shine?

Once Step Back by Carole Cummings


When Sahir is busy running for his life, it never occurs to him that the being in wrong place at the wrong time might turn into the right place at the right time. Not until he literally collides with Nicholas and salvation comes by way of magical intervention. But when Nicholas ends up being the one who really needs help, Sahir has to decide the best way to give it—and how to offer it to someone who can’t even figure out if he wants it.


Many people reach a point where they think life can’t get any worse. Rock bottom, where the future is so bleak, they begin to ask, “why bother?”
When homeless gay man Wayne Kent reaches that point, standing on a Pittsburgh bridge on a cold Tuesday in April, the last thing he expects is to get stopped—especially by a man named Bruce Clark.
But Bruce has been there, he’s seen that, he’s thought and felt the things Wayne is now and he refuses to see the beautiful, hurting man become another statistic. Coffee and a sandwich is a first step and Bruce hopes it’ll lead to a permanent step up for Wayne. And maybe even a step toward more together.


A love lost over half a century ago. Is there really redemption for all of our regrets, or at least perhaps for one regret? A chance to change the decision you made over half a century ago, or at least a chance to say what was unsaid, to say what could be said now? The love you missed so long ago, and if you could have one moment again, once last chance.

Love and Hope and Magic by Antonia Aquilante


Once each century, a ritual is performed, the magic of which sustains the land and protects it and its people for the century to come. But the person who performs the ritual never survives. This time Ailill is chosen. He is honored and content with his fate, but his best friend Lorcan is not. Lorcan can’t accept the loss of Ailill and can’t see a life without the man he thinks of as his other half. But Ailill knew Lorcan perhaps better than Lorcan knows himself, and he knew a life of love and magic is waiting for Lorcan after Ailill is gone, if only Lorcan can find the courage to reach for it.
Façade by D. Zander Crane


David struggles with his gender identity as he searches his city for a woman-murdering madman in his female alter-ego, Façade. Can he overcome his depression and confusion long enough to stop the Grinning Reaper?
Programs Helped by this Anthology


Homo-Erotic Romance Author, Tempeste O’Riley is an out and proud pansexual genderfluid whose best friend growing up had the courage to do what they couldn’t – defy the hate and come out. He has been their hero ever since. Tempe is a hopeless romantic who loves strong relationships and happily-ever-afters. They count their friends, family, and Muse as their greatest blessings in life.
Tempe is also a PAN member of Romance Writers of America®, Rainbow Romance Writers, and WisRWA.


Dianne is the author of paranormal/suspense, fantasy adventure, m/m romance, and anything else that comes to mind. She lives in the beautiful Willamette Valley of Oregon with her incredibly patient husband, who puts up with the endless hours she spends hunched over the keyboard letting her characters play. She says Oregon’s raindrops are the perfect setting in which to write. There’s something about being cooped up in the house with a fire crackling on the hearth and a cup of hot coffee warming her hands, which kindles her imagination.

Currently, Dianne works as a floral designer in a locally-owned gift shop. Which is the perfect job for her. When not writing, she can express herself through the rich colors and textures of flowers and foliage.
Website: http://diannehartsock.wordpress.com/


Nikki Prince is a mother of two, who’s always had a dream to be a published author in the romance genre. Her passion lies in raising her children as readers, gaming, cooking, reading and her writing. Her mother can now breathe easy about the child who used to get in trouble because she was hiding books everywhere and reading when it wasn’t appropriate.

Nikki’s a multi-published author with several epublishing houses. She loves to write Interracial romances in all genres, but wants to let everyone know to not box her in, because there is always room for growth.


Real, erotic, forever... Grace Duncan grew up with a wild imagination. She told stories from an early age – many of which got her into trouble. Eventually, she learned to channel that imagination into less troublesome areas, including fanfiction, which is what has led her to writing male/male erotica. A gypsy in her own right, Grace has lived all over the United States. She has currently set up camp in East Texas with her husband and children – both the human and furry kind. As one of those rare creatures who loves research, Grace can get lost for hours on the internet, reading up on any number of strange and different topics. She can also be found writing fanfiction, reading fantasy, crime, suspense, romance and other erotica or even dabbling in art.

Sue Brown is owned by her dog and two children. When she isn't following their orders, she can be found plotting at her laptop. In fact, she hides so she can plot, and has become an expert at ignoring the orders.

Sue discovered M/M erotica at the time she woke up to find two men kissing on her favorite television series. She had an Aha moment and put pen to paper that same day. Sue may be late to the party, but she's made up for it since, writing fan fiction until she was brave enough to venture out into the world of original fiction.


Áine is a proud member of the Rom-Critters, the Romance Writers of America®, WisRWA, and Rainbow Romance Writers. Áine has always had a particular fascination with vampires, mythology, and the unusual. When she can escape from her children and books, she enjoys... oh yes, reading, playing, ritual, a good cappuccino, and working with her healing stones.
Her first published work came in high school where she was part of a writing and drama group. However, she has been reading the likes of Shakespeare and Poe since late elementary school and enjoys most forms of fiction.


Carole lives with her husband and family in Pennsylvania, USA, where she spends her time trying to find time to write. Recipient of various amateur and professional writing awards, she is the author of nine published speculative fiction novels, two series, and… more short stories than she can keep track of.


Young adult/new adult author who loves to write the tough stuff...but always with a happy ending.

Hope Ryan is an out and proud bigender, bisexual, wife of a loving guy and mother to three, including an amazingly brave genderfluid son. She loves to write about the tough stuff, but also wants to see her characters happy in the end. She feels strongly about showing there is hope for everyone, no matter where you come from, how you identify your gender or who you love. Hope likes to play board and card games and can often be found playing God with her Sims or running around, fighting monsters in a virtual version of Middle Earth. Her TV and movie preferences lean towards anime, sci-fi and fantasy, though she’ll never turn down a good happily ever after love story, either. As long as there are explosions or action, she’s happy. She loves to read books of all kinds, though prefers stories about love in its many forms.


Antonia Aquilante has been making up stories for as long as she can remember, and at the age of twelve, decided she would be a writer when she grew up. After many years and a few career detours, she has returned to that original plan. Her stories have changed over the years, but one thing has remained consistent - they all end in happily ever after.


D. Zander Crane is an aspiring, if occasional author, computer troubleshooter, and semi-professional putt-putt golf commentator. He resides in West Chester, Ohio, with the ghost of his mother, a Manx named Hae Yu, and a dozen unfinished manuscripts. His inspiration is long-time friend Tempe.