#Giveaway! Welcome to the Blog Tour for Lou Sylvre's "Falling Snow and Snow"! 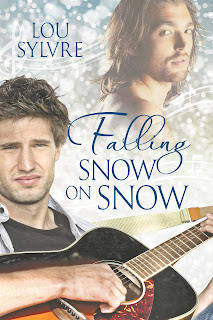 Join me in welcoming Lou Sylvre to my blog with her heartfelt New Year's Wishes and her newest novel, Falling Snow on Snow! Don't forget to scroll down and enter the giveaway!
Falling Snow on Snow is now available at Dreamspinner Press,
Amazon, Indigo Books, Kobo, and Barnes & Noble

Hello everybody! Today is the last day of my Falling Snow on Snow blog tour, and the penultimate day of 2016. I struggled with writing this post, made several false starts, pondered and an equivocated, and eventually came to the decision to keep it simple.

This may in fact be the shortest blog post I’ve ever written for any blog tour, not just this one. I’m only going to make some New Year wishes for us all—wishes for good things to happen for each of us in 2017, perhaps like some of the good things Beck and Oleg found as their story unfolded in Falling Snow on Snow.

Beck found the warmth of family when he found Oleg. That was one thing Oleg already had. Here’s the home he grew up in:

“Warm, large but not so much so that it ever felt too spacious. Never empty. Air rich with the smells of stroganoff, borscht, shashlik, or honeycake. Ready laughter, flash-in-the-pan tempers, small favors asked or done. And behind it all, in the Abramov home, always the music: scales ad infinitum, students repeating sixteen measures over and over slow to fast and finally tumbling into the following passage. Sometimes, too, whole beautifully sculpted pieces, perilous to the listening—or performing—heart.” 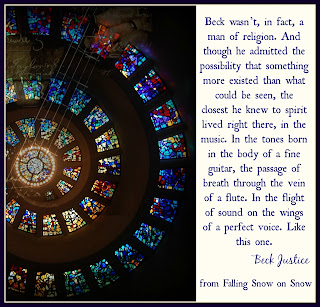 And I wish for you (and me) the same sweetness in 2017: family, whether it is the one you were born into, the one you brought into the world, the one you created from scratch, or some mixture of all three, as I suspect is the case for many of us.

Second I wish compassion for you (and me)—both that others will be compassionate to us, and that we, like Beck, will find the gift to self that compassion and kindness to others can bring. As Beck came to see, “compassion didn’t hinge on whether one deserved it. Because, for him at least, having compassion meant he could live with the mirror’s reflection.” I hope you understand I’m not preaching. It’s just that, sadly, I think 2017 might be a year when caring and kindness will be especially needed.

I’d like to wish for all of us passionate romance, such as Beck and Oleg did eventually find. However, that’s going a bit out on a slender limb. So instead, I’ll add my hopes for all of us to have these things:

Songs that make us think, like Beck, that something like spirit resides in the music, “in the tones born in the body of a fine guitar, the passage of breath through the vein of a flute. In the flight of sound on the wings of a perfect voice.”

Books that make us, like Beck, “fall in love with the characters every time” he read the books, which he did repeatedly even though “he dreaded the way he felt so much more alone when he reached the end.”

And finally, light to lift us from our darkest times, as happened at a key moment for Oleg. “The descending winter sun shot slanted beams through clouds and into the room. Suddenly—clean, with a full belly, in the delicious warmth of the gold-lit kitchen—everything felt different to Oleg. Things seemed… possible.”

I guess that last sentence sums it up. For 2017, I wish for you a full measure of bright, sparkling, even perhaps magical possibility.

Thanks Aisling, for hosting me. Thanks readers for stopping by, and for every time you’ve picked up one of my books and gave my characters a chance to live again. Before you go, don’t forget to enter my giveaway.

Happy New Year to all!

About Falling Snow on Snow 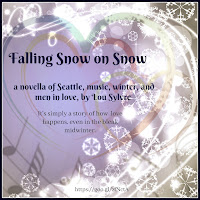 Beck Justice knows holiday sparkle and snappy carols only mask December’s cruel, black heart. He learned that lesson even before he landed on the streets eight years ago, and his recent step up to a tiny apartment and a busker’s permit for Seattle’s Pike Place Market has done nothing to change his mind. But one day in the market, Oleg Abramov joins his ethereal voice to Beck’s guitar, and Beck glimpses light in his bleak, dark winter.

Oleg, lucky to have a large and loving family, believes Beck could be the man to fill the void that nevertheless remains in his life. The two men step out on a path toward love, but it proves as slippery as Seattle’s icy streets. Just when they get close, a misunderstanding shatters their hopes. Light and harmony are still within reach, but only if they choose to believe, risk their hearts, and trust.


Lou Sylvre loves romance with all its ups and downs, and likes to conjure it into books. The sweethearts on her pages are men who end up loving each other—and usually saving each other from unspeakable danger. It’s all pretty crazy and very, very sexy. How cool is that?
As if you'd want to know more, she’ll happily tell you that she is a proudly bisexual woman, a mother, grandmother, lover of languages, and cat-herder. She works closely with lead cat and writing assistant, the (male) Queen of Budapest, Boudreau St. Clair.
In addition to Falling Snow on Snow, Lou is the creator of the popular Vasquez and James series of M/M romantic suspense, published by Dreamspinner Press. A spinoff series Vasquez Security the next generation has begun, with book 2 currently in the works. She's co-authored the novella Sunset at Pencarrow with Anne Barwell, an upcoming release.


You can find Lou on her Website, Facebook, Twitter @Sylvre, Goodreads, Google+,
and email Lou at lou.sylvre@gmail.com
a Rafflecopter giveaway
Posted by Aisling Mancy at 5:00 PM