#ExclusiveArticle Joe Cosentino's "Drama Luau," Book Four in the Nicky and Noah Mystery Series is Out! 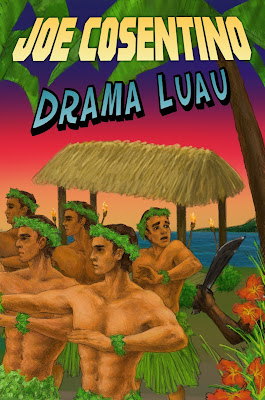 Join me in welcoming Joe Cosentino back to my blog with an exclusive interview and his newest novel, Drama Luau, Book 4 in the Nicky and Noah Mystery Series!
Drama Luau is available now at
Amazon, iBooks/Tunes, Kobo, Smashwords and Barnes & Noble


The release of Drama Luau, the fourth Nicky and Noah mystery
by Joe Cosentino
They say laughter is the best medicine. When fans tell me they laugh out loud when reading my Nicky and Noah mystery novels, I very gratefully thank them. What they don’t know (well they do now) is that I do the same when writing them! My spouse has grown accustomed to hearing hysterical laughter from my study, peeking in and finding me in uproarious laughter with tears streaming down my face. So, thanks to my main character, Nicky Abbondanza, whispering those wild and wacky lines in my ear, we’ll all be happy and healthy. Well, with the new healthcare laws coming, maybe not. But at least we’ll all be laughing.

I was recently at the Rainbow Book Fair in New York City, where I got to meet a number of Nicky and Noah fans. They quoted their favorite lines from the books, and before I knew it, we were all wiping away the tears of laughter. For those of you who haven’t read the first three novels in the Nicky and Noah mystery series (and you should!), it is a gay cozy mystery comedy series, meaning the setting is warm and cozy, the clues and murders (and laughs) come fast and furious, and there are enough plot twists and turns and a surprise ending to keep the pages turning. At the center is a touching gay romance between Associate Professor of Directing Nicky Abbondanza and Assistant Professor of Acting Noah Oliver. As Nicky and Noah fall in love, I’ve heard the readers fall in love with them too. And throughout, Nicky spouts out one-liners quicker than a priest heading to an altar boy convention.
In Drama Queen (Divine Magazine’s Readers’ Choice Award for Favorite LGBT Mystery, Humorous, and Contemporary Novel of 2015) college theatre professors are dropping like stage curtains at Treemeadow College, and amateur sleuths/college theatre professors Nicky and Noah use their theatre skills, including impersonating other people, to figure out whodunit. Reviewers called Drama Queen hysterically funny farce, Murder She Wrote meets Hart to Hart meets The Hardy Boys, and a captivating whodunit. Who am I to argue? One reviewer wrote Drama Queen was the funniest books she’d ever read!
In Drama Muscle (Rainbow Award Honorable Mention 2016) Nicky and Noah don their gay Holmes and Watson personas again to find out why bodybuilding students and professors at Treemeadow are dropping faster than barbells. Also, Nicky and Noah’s relationship reaches a milestone by the end of the novel.
In Drama Cruise it is summer on a ten-day cruise from San Francisco to Alaska and back (which my spouse and I also did). Nicky and Noah must figure out why college theatre professors are dropping like life rafts as Nicky directs a murder mystery dinner theatre show onboard ship starring Noah and other college theatre professors from across the US. Complicating matters are their both sets of wacky parents who want to embark on all the activities on and off the boat with the handsome couple.
Now in Drama Luau, Nicky is directing the luau show at the Maui Mist Resort and he and Noah need to figure out why muscular Hawaiian hula dancers are dropping like grass skirts. Their department head and his husband, Martin and Ruben, are along for the bumpy tropical ride. In addition to the sexy hula dancers, we meet a handsome Hawaiian detective, a Bloody Mary type housekeeper, a cigar chomping hotel manager, the hotel owner and his senator wife who give new meaning to the term family values, and a cute young waiter who wants to be a hula dancer more than an anti-gay politician wants a dark backroom in a gay bar. It was great including all the fun things my spouse and I did on our trip to gorgeous Maui into this fast-paced, humorous, spine-tingling mystery with a very shocking ending. Nicky and Noah have the time of their lives solving this one. They also find their relationship in for quite a change.
And watch for Drama Detective, book five, releasing in six months! Drama Fraternity and Drama Castle will follow. Also, check out my web site at: http://www.JoeCosentino.weebly.com for the latest on my In My Heart series (Dreamspinner Press), Bobby and Paolo Holiday Stories (Dreamspinner Press), The Naked Prince and Other Tales from Fairyland (Dreamspinner Press), Cozzi Cove beach series (NineStar Press), and Jana Lane mysteries (The Wild Rose Press).
It is my joy and pleasure to share these stories with you. So grab your plate at the buffet table, and take your front row seat for the luau show. The grass curtain is going up on Drama Luau! See you in Maui!
About Drama Luau

Theatre professors and spouses, Nicky Abbondanza and Noah Oliver, are on their honeymoon at a Hawaiian resort, where musclemen in grass skirts are keeling over like waterfalls. Things erupt faster than a volcano when Nicky and Noah, along with their best friends Martin and Ruben, try to stage a luau show. Nicky and Noah will need to use their drama skills to figure out who is bringing the grass curtain down on male hula dancers—before things go coconuts for the handsome couple. You will be applauding and shouting Bravo for Joe Cosentino’s fast-paced, side-splittingly funny, edge-of-your-seat entertaining fourth novel in this delightful series. Curtain up and aloha!

“Joe Cosentino has a unique and fabulous gift. His writing is flawless, and his use of farce, along with his convoluted plot-lines, will have you guessing until the very last page, which makes his books a joy to read. His books are worth their weight in gold, and if you haven't discovered them yet you are in for a rare treat. DRAMA LUAU joins his other books on my 5-star reread shelf. It may actually be my favourite one yet! Highly recommended.”—Divine Magazine 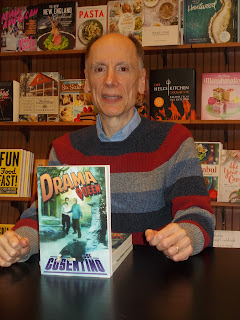 Bestselling author Joe Cosentino was voted Favorite Mystery, Humorous, and Contemporary Author of 2015 by the readers of Divine Magazine for Drama Queen. He also wrote the other novels in the Nicky and Noah mystery series: Drama Muscle (Rainbow Award Honorable Mention) and Drama Cruise (Lethe Press), Drama Luau; In My Heart/An Infatuation & A Shooting Star (Rainbow Award Honorable Mention), A Home for the Holidays, The Naked Prince and Other Tales from Fairyland (Dreamspinner Press); Cozzi Cove: Bouncing Back (TBR Pile Book of the Month/Rainbow Award Honorable Mention), Cozzi Cove: Moving Forward, Cozzi Cove: Stepping Out, Cozzi Cove: New Beginnings Cozzi Cove series (NineStar Press); Paper Doll, Porcelain Doll, Satin Doll, China Doll, Rag Doll (The Wild Rose Press) Jana Lane mysteries; and The Nutcracker and the Mouse King (Eldridge Plays and Musicals). He has appeared in principal acting roles in film, television, and theatre, opposite stars such as Bruce Willis, Rosie O’Donnell, Taylor, and Jason Robards. His one-act plays, Infatuation and Neighbor, were performed in . He wrote The Perils of Pauline educational film (Prentice Hall Publishers). Joe is currently Head of the Department/Professor at a college in upstate , and is happily married. Joe was voted for Best MM Author of the Year in Divine Magazine’s Readers’ Choice Awards for 2015! Coming next: Drama Detective, the fifth Nicky and Noah mystery.

Posted by Aisling Mancy at 1:00 AM