Welcome to the Book Tour for Sleight of Heart! 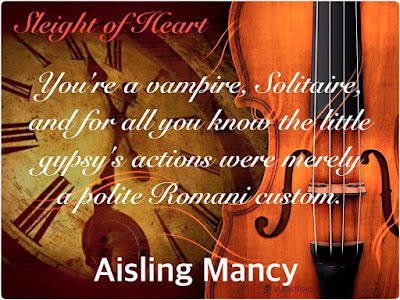 Welcome to the Book Tour for
Sleight of Heart!
Now available from

Amy Lane, who has the biggest heart in the world, flails Sleight of Heart!

About Sleight of Heart

A vampire mage, a Romani young man, and a love that won't be denied.

Lord Taliesin Solitaire was born albino, cursed mute by the fey, and betrayed by a vampire lover. For two hundred years, the vampire mage has vowed never to love again and has only used sex as a means to a meal. Until a palm-reading gypsy finds himself in peril and Taliesin can’t resist rescuing the beautiful young man.

Pesha Sinclair is the eldest but smallest son of King Vaida Sinclair, the oppressive ruler of the Kåle Romani Compania. Deemed impure by his father, Pesha is shunned and mistreated by his band and four half-brothers, and one brother in particular wants him dead. His pale, silent savior gives him safety, security and a love he never could have imagined. As Pesha falls in love with his handsome white knight, his half-brother does the unthinkable.

Ash is an author who lives, most of the time, on the West Coast of the . Ash writes adult fantasy, science fiction, adult romance, and fiction for gay young adults as C. Kennedy.

Raised on the mean streets and back lots of  by a Yoda-look-alike grandfather, Ash doesn’t conform, doesn’t fit in, is epic awkward, and lives to perfect a deep-seated oppositional defiance disorder. In a constant state of fascination with the trivial, Ash contemplates such weighty questions as If time and space are curved, then where do all the straight people come from? When not writing, Ash can be found taming waves on western shores, pondering the nutritional value of sunsets, appreciating the much-maligned dandelion, unhooking guide ropes from stanchions, and marveling at all things ordinary.

Find Ash on blog, Twitter @AislingMancy, Facebook, Google+, Goodreads, Booklikes, Amazon, and Ash does respond to emails because, after all, it is all about you, the reader.
Posted by Aisling Mancy at 3:00 AM

New comments are not allowed.